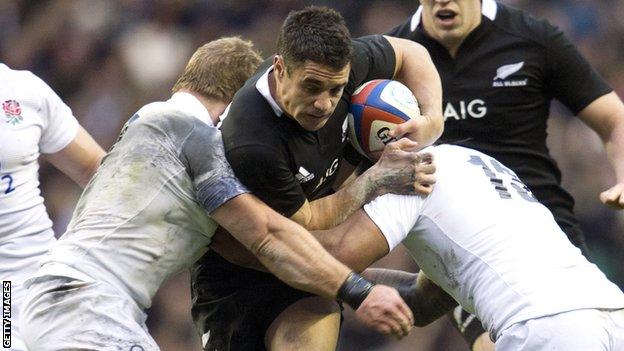 The 32-year-old fly-half, currently on a break from playing, says England could prove their credentials with Test victories in New Zealand in June.

England play the world champions in Auckland, Dunedin and Hamilton.

He is the ultimate professional

"England will definitely be a threat. They are building momentum, getting a strong squad together and building confidence," he said.

"In every World Cup I've been involved in, the host nation is always a team to look out for - they will definitely be there or thereabouts."

England's last win in New Zealand came in Wellington in June 2003 as Sir Clive Woodward's side geared up for their Rugby World Cup victory in November that year.

Carter, who has 100 caps for the All Blacks, knows how much confidence England took from that Test win in New Zealand and thinks there is "no doubt" the 2014 vintage will be a threat on tour in New Zealand this summer.

"It's going to be a great Test series. I'm sure they'll love to challenge themselves against the best around," he added.

However, New Zealand's recent record shows the enormity of the task England face this summer.

Carter himself hopes to be back in England for the World Cup next year after his sabbatical.

He said: "I've been working hard on getting on top of a few injuries and niggles and just freshening up mentally."

And he revealed that former England fly-half Jonny Wilkinson, who currently plays for European champions Toulon but is expected to retire in the summer, has been an inspiration.

"He's the ultimate professional and probably works harder than any other player in the world," said Carter, adding that Wilkinson's exemplary attitude and determination forced him to raise his own standards. "If I was thinking about the best rugby players of all time, he would be up there."