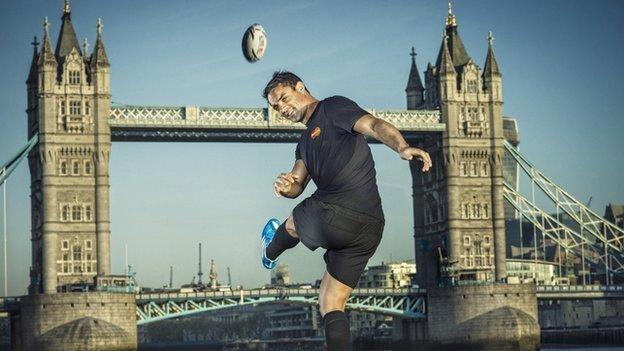 With 100 New Zealand caps, a record 1,440 international points, and a World Cup winners' medal in the bag, Dan Carter has little left to prove.

To most, the 32-year-old is the best fly-half of his generation; to many, the greatest of all-time.

But while his Crusaders team-mates are in the thick of the new Super Rugby season, and the All Blacks among them are looking ahead to England's tour in June, Carter is on "sabbatical" and has spent the last couple of weeks globe-trotting: from golf's Masters at Augusta, to the Coachella Music Festival in California, to London.

Like Richie McCaw and Conrad Smith before him, Carter has been given some time off by the New Zealand Rugby Union (NZRU), with the aim of prolonging his international career to the 2015 World Cup in England and beyond.

"I've had a lot of injuries over the last two or three years, which has been quite frustrating," he told BBC Radio 5 live. "So to be given an opportunity like this just to get away from the game and do a lot of rehab has been fantastic.

"Hopefully it will give me a bit of longevity, help me build some form and give me the opportunity to pull on the black jersey here in England in 2015. That's a big goal of mine.

Carter will return to action with the Crusaders in July, and although this season presents numerous challenges, for him and the All Blacks - who won all 14 of their internationals in 2013 - playing in the World Cup next year is the overriding incentive.

Furthermore, despite New Zealand's World Cup win in 2011, the fly-half admits he has unfinished business in the tournament.

In 2007, he limped out of the quarter-final defeat by France, while four years later, a serious groin injury suffered in training denied him the chance to feature in the knockout stages.

"I've been proud of a few things I've achieved in my career, but haven't had a lot of success at World Cups," he said. "My goal is to be a part of that World Cup side in England, but there is so much work to be done before that."

The build-up to next year's showpiece has begun in earnest. Sponsors and commercial partners are signing up by the week and senior International Rugby Board (IRB) figures believe this World Cup - the eighth - will be the biggest and best yet.

No side has won back-to-back trophies, and creating such a legacy is what Carter believes is driving the All Blacks on.

"There is a reason no team has won consecutive World Cups - because it's not an easy thing to do," he says. "But we love making history.

"Winning one was a huge challenge for us, and we only just did that. We are probably going to be favourites as defending champions, but we love that pressure and are looking forward to it.

"But there is so much hard work that needs to go on before then. We need to be playing better rugby than we did last year, or the previous World Cup, if we are going to have any chance of winning it again.

"It's an exciting time, and as a player you want to be involved and be a part of it, so I can't wait."