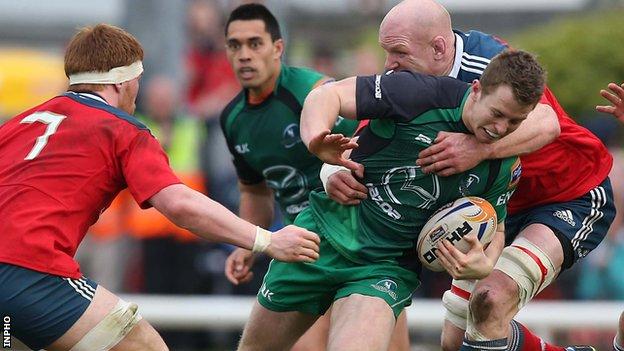 Munster moved back into second place in the Pro12 thanks to this bonus-point win over derby rivals Connacht.

Andrew Conway scored Munster's opening try in Galway but Matt Healy went over for Connacht before the visitors pulled clear late in the first half.

Tries from Gerhard van den Heever and Denis Healy helped Munster to a 27-8 advantage at the break.

Despite enjoying the lion's share of possession, Munster fell behind in the 15th minute when Miah Nikora left-footed a long-range penalty through the posts.

Poor defending from Connacht allowed Munster to hit back just over a minute later.

A scrum move saw Duncan Williams feed Conway on an angled run and he slipped by Willie Faloon to race in under the posts.

After Ian Keatley converted, Connacht returned the favour in scoring off set-piece ball.

They swung scrum possession wide to the left, using two decoy runners in the middle, as crisp passes from Eoin Griffin and Darragh Leader released winger Healy for the corner.

The try went unconverted and the tit-for-tat scoring continued as Keatley clipped over two successive penalties.

Munster struck a killer blow five minutes before the break, though, as Van den Heever gobbled up Henshaw's pass to run in an intercept effort from the 10-metre line.

Connacht were desperately unlucky to leak a third try in the 38th minute, the match officials missing James Downey's high no-arms tackle on Poolman and turnover ball saw Williams collect his own chip and send Hurley sprinting away for another seven-pointer.

CJ Stander was adjudged to have lost the ball forward as Munster pressed for the opening try of the second half, which Connacht eventually scored in the 53rd minute.

Number eight McKeon was sent over in the left corner by league debutant Conor Gilsenan following some patient build-up play.

The westerners reduced the arrears to 27-16 thanks to a Nikora penalty as Munster butchered a couple of opportunities from close-in lineouts.

However, the visitors made certain of their five-point return when Donncha O'Callaghan won a turnover on the deck and number eight Butler muscled over from a ruck.

Connacht gained some late consolation when Poolman picked off a loose pass and cantered clear for a deserved score which Dan Parks converted.