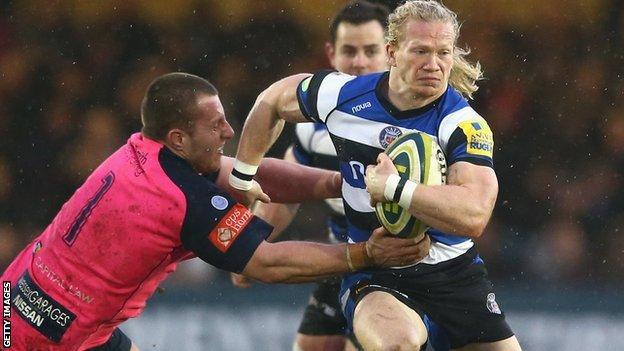 Worcester have agreed a deal to sign Bath winger Tom Biggs in the summer.

The 29-year-old had been set to switch codes and join Super League side Hull FC before the transfer was called off earlier this month amid speculation he was moving to Sixways.

"It caught us by surprise as we thought he was going to Hull," said Ford.

"I've been working for the last four months assuming Biggs isn't going to be here.

"But that deal fell through and we couldn't negotiate with him because we've spent our budget. Worcester then came in with a very good offer and he's taken it.

"I wish we could have predicted the deal with Hull would have fallen through. We may have got him a bit earlier. I tried to re-organise the jigsaw but we couldn't work it out.

"But he's made his decision and we wish him well. He'll be a great servant to Worcester."

Biggs, who has played for England Saxons, has scored 32 tries in 127 Premiership appearances for Leeds Carnegie, Newcastle Falcons and Bath.

"I am excited about the challenge of joining Worcester," he said.

"They are a very ambitious club but have not reached where they have wanted to be over recent seasons and I want to play a part in helping them achieve success.

"I am looking forward to working with Carl Hogg again, who I worked with at Leeds, and with my ex-Bath team-mate Sam Vesty.

"When I met with [director of rugby] Dean [Ryan] he was very honest about where the club were and where he wants to take it."

Warriors, who are bottom of the Premiership with only one win all season, are eight points behind second-bottom Newcastle with two games to play.