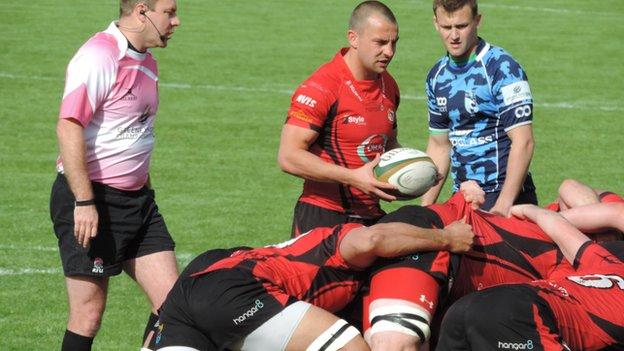 Jersey secured their Championship status with a 41-31 win at Bedford on a nerve-jangling final day of the season.

The bonus-point win, coupled with Ealing's narrow loss against Rotherham, ensured the islanders stayed up by a single point and Ealing go down.

Jersey went into the game knowing they would probably need to win to have a chance of avoiding the drop.

Tries from Nick Campbell, Nicky Griffiths, Drew Locke and a penalty try helped them to victory.

Harry Wells, Ollie Dodge, Brendan Burke and former Jersey back Michael Le Bourgeois scored for the hosts, but their four tries were not enough.

The islanders came out of the blocks firing and two tries in the opening quarter of an hour set them on their way.

Campbell's converted pushover try put the islanders 10-3 ahead before scrum-half Griffiths danced his way through and showed real strength to ground the ball in the corner.

Back came the Blues with Wells and Dodge going over in quick succession, but gutsy Jersey regained the momentum before half time as Locke latched onto an Aaron Penberthy kick for the second week in-a-row to claim his side's third.

With news filtering through that Ealing were well behind against Rotherham, Jersey fans started to believe they would still be watching Championship rugby at St Peter next season.

Burke's try though, on his final outing for the club, narrowed the gap to four points before Le Bourgeois crossed the whitewash against his old club to help tie the scores at 31-31.

It was a tense end to the season, a real cliff-hanger, but everyone involved with Jersey Rugby Club is delighted.

The players gave everything, they kept calm under tremendous pressure and beat a good Bedford side.

When everyone takes a few days to calm down, the management and directors at the club can start to look forward to developing a young side for the future.

Meanwhile, at Vallis Way, Ealing started to claw their way back and still had hope of clinging on to their Championship place.

Jersey were not about to let things slip though, and a penalty try following a strong drive towards the line put them back firmly in the driving seat with just over ten minutes remaining.

A Penberthy penalty extended the advantage to 41-31, and despite Ealing's late rally in West London to clinch two points, Jersey claimed the win and could celebrate their survival.

For Bedford, who were skippered by Sacha Harding in his 200th and final appearance before retirement, the defeat confirms their worst campaign for more than a decade.