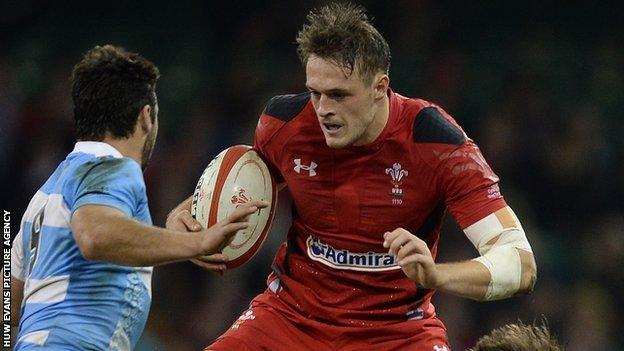 Pundit Davies says Allen is a better footballer than Roberts, but must prove be an equal ball-carrier.

"And if he can carry the ball as well as Jamie, well, questions have got to be asked then and he's going to put his hand up."

Once-capped Cardiff Blue Allen, 21, may earn a chance to be directly compared to Racing Metro's 58-times capped, 27-year-old Roberts if the duo are chosen to tour South Africa in June with Wales.

Allen made his Wales debut in November, 2013 against Argentina amid a midfield injury crisis.

Roberts and regular midfield partner Jonathan Davies, both British and Irish Lions, had been respectively ruled out by an ankle and pectoral injuries.

But Allen was still a shock selection to face the Pumas alongside another rising star in Scarlet Scott Williams, 23, who has made 25 Wales appearances, 15 of them off the bench.

Allen then also fell victim to injury - in his case a dislocated shoulder - against Argentina and was ruled out of contention for Wales in the Six Nations.

However, a return to form and fitness gave Allen the chance to take on Scarlets skipper Davies in the regions' Judgement Day showdown at Millennium Stadium on Easter Sunday.

Pundit Jonathan Davies, not to be confused with the Scarlets' centre of the same name, says Allen impressed in the Blues' 17-13 win.

"But there's something about Cory Allen; he's got time on the ball, he throws lovely, slow dummies.

"He's got the physical presence as well to get over the gain-line.

"So if he kind of improves each season or each game as it goes on will he put his hand up to try and break into that midfield?

"Because you've got a very typical style that Wales coach Warren Gatland likes - he likes the big boys.

"And Jamie Roberts is a big part of his side, but I think footballing-wise he [Allen] offers a little bit more."

If Gatland has all his centre options fit and available, he could be spoilt for choice.

Roberts and Davies have become his favoured pairing and starred for the 2013 Lions in the series-clinching third Test win against Australia.

Davies' fellow Scarlet Scott Williams has been lauded as a "superstar in the making" by another BBC pundit in England midfield legend Jeremy Guscott.

And Blues have also seen Owen Williams, also not to be confused with Leicester's Welsh fly-half, develop into a capped international alongside Allen since Roberts left for Paris at the end of the 2012-13 season.