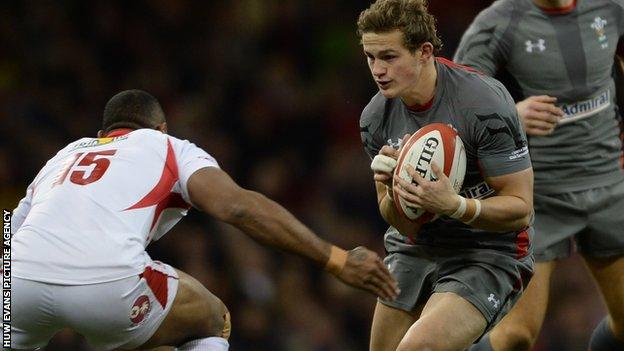 Wales caps Dafydd Howells of the Ospreys and the Dragons' Hallam Amos have been named in the Wales Under-20 squad for the Junior World Championship.

Head coach Byron Hayward has named a 28-man squad for the tournament in New Zealand.

Ten players, who reached last season's final, have been named in the squad.

Wales lost to England 23-15 in the final of the 2013 Junior World Championships in France.

Ospreys wing Howells, 19, made his senior Wales debut on the summer to Japan in 2013, while Dragons full-back Amos, 19, made his full debut against Tonga in November.

Our aim is to get through to the semi-finals and as we all know from our win over South Africa in last year's semi, anything is possible at that point

"Our aim is to get through to the semi-finals and as we all know from our win over South Africa in last year's semi, anything is possible at that point," said Hayward.

"It will be a different challenge playing in New Zealand, hence travelling a couple of days early and thinking about the consequences of having to fly players out in case of injury but we have built that into our selection as much as possible."

Hayward's side will play Scotland in a warm-up game on Wednesday, 14 May at Bridgend's Brewery Field, before flying out to New Zealand for the tournament which takes place between 2 and 20 June.

"We play Fiji, Ireland and France in our Pool so the game against Scotland will help us to try out some of our game plans in a match situation," said Hayward.

"Having reviewed our Six Nations performances, we can be happy with our performance against Ireland, where our set-piece was key in grinding out an important win in Athlone, we lost to France, the other Six Nations team in our pool, by one score and we were down to 14 men for 20 minutes in that game.

"We learned a lot of lessons in that match and if we get the tactical game right and the players adapt to the opposition in front of them, we certainly have a chance against all the teams in our group."