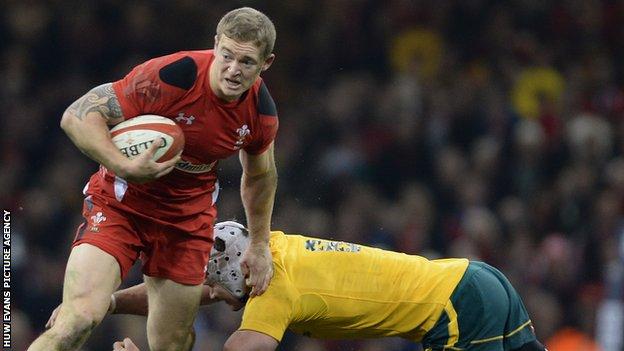 Wales Under-20 coach Byron Hayward believes the exodus of senior internationals to clubs in England and France has benefited young Welsh players.

Players including Jamie Roberts and George North have left Wales.

Hayward says the loss of high-profile players has forced the regions to field youngsters.

"It's giving more opportunities to younger players, there's no doubt about that," Hayward said.

British and Irish Lion Roberts now plays for Racing Metro in France, while wing North joined English Premiership side Northampton from Scarlets at the start of the current season.

Cardiff Blues centres Owen Williams and Cory Allen have featured regularly for the Blues following Roberts's exit and 20-year-old Jordan Williams has played in 26 games for Scarlets this season.

Number eight Dan Baker, 21, has produced a string of impressive performances for the Ospreys this season and has emerged as a candidate for Wales' tour to South Africa.

"I think it's a positive thing that the young players are getting that exposure that they may not have got a few years ago," Hayward said.

"If you look, over the last few years, how well the Welsh senior team has done and how young that team has been it only has to be down to the exposure that the young players have had by being exposed to the regional game at such a young age."

Senior caps Dafydd Howells of the Ospreys and the Dragons' Hallam Amos have been included in the Wales Under-20 squad for June's IRB Junior World Championship in New Zealand.

Wales captain Sam Warburton, Leigh Halfpenny and Jonathan Davies are among the former Under-20 players who have progressed through the age levels and established themselves in the senior side.

Former Wales and Ebbw Vale fly-half Hayward says the Under-20 side plays an important role in player development and is confident many of the current squad will gain senior international honours in the future.

"There's no doubt there's a lot of talent in this squad and I'm positive that a lot of these players will play in the senior team in the years ahead," said Hayward, who succeeded Danny Wilson as Under-20 head coach in 2013.

"You get a great deal of satisfaction seeing these players go on.

"You do get a sense of pride knowing you played a small part in their development along the way to getting where they are, in particular when you see them run out at the Millennium Stadium for the senior team."