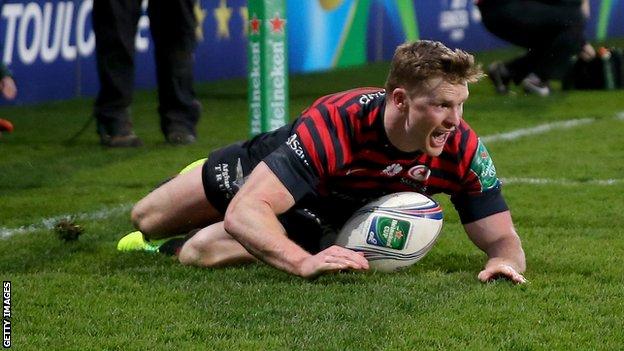 Winger Chris Ashton wants to win back his England place as he looks to guide Saracens to their first Heineken Cup final.

The 27-year-old scored two tries against Ulster to help set up a last-four meeting with Clermont Auvergne at Twickenham on Saturday.

These are the games I want to be involved in, it's another reason I came to this club

He is now targeting selection for England's summer tour of New Zealand.

"I'm a great believer in everything happening for a reason," Ashton told BBC Radio 5 live.

"I've got a couple of games left this season to put my hand up, and get back involved in New Zealand."

Despite struggling to find his best form in an England shirt over the last couple of seasons, Ashton has flourished for Saracens.

With nine tries in the Heineken Cup this campaign, he is just one away from equalling the all-time tournament record for tries in a season.

"These are the games I want to be involved in, it's another reason I came to this club," he said. "I'll take the try if it comes at the weekend, but if it doesn't, I won't be forcing my hand to get it."

After being beaten at the semi-final stage both domestically and in Europe last season, Ashton says the club is better equipped to go one better this time around.

"As a team we have changed quite a lot, in the way we play and the personnel we have. The group knows each other a little bit more, and we've moved on to another level," he added.

"I think we need to prove to ourselves more than anything else that we can go one step further."

Ashton hopes another strong individual display will convince England head coach Stuart Lancaster that he is ready for an international recall.

"Last time I spoke to Stuart, he said it's in my hands to get involved," said Ashton. "New Zealand's going to be a tough tour, and you want to be involved in that in the build up to the World Cup. I'm enjoying rugby again."

Ashton has represented England 37 times but has not played for his country since November, after being dropped for the Six Nations.

In his absence, Jack Nowell, 21, and 24-year-old Jonny May started every game in the Six Nations, but Ashton thinks he can regain his international place.

"Wing is a position where there are always new and up-and-coming players coming through. But the great players - like Brian O'Driscoll - always manage to stay in the team and on top of their game.

"Those kind of setbacks have got to spur you on. That's why they are there, to push you on and improve. Hopefully my time will come again."

Hear more from Ashton on 5 live Rugby on Thursday evening, BBC Radio 5live at 19:30 BST. There is commentary of Saracens against Clermont Auvergne on 5 live sports extra on Saturday from 15:25.