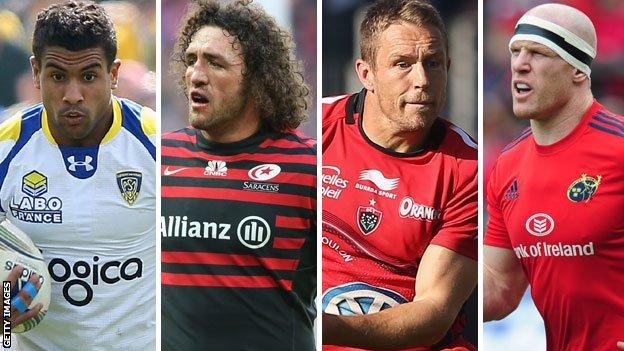 Now the future of European rugby's premier club competition is secure, with a new name and format, we can revel in the remainder of this season's Heineken Cup.

This weekend's first semi-final featured two teams - Saracens and Clermont Auvergne - hoping to claim a first Heineken crown, while defending champions Toulon and two-time winners Munster, who meet in the second semi on Sunday, are intent on adding to previous triumphs.

Saracens turned on the style to trounce Clermont Auvergne 46-6 in the first semi-final on Saturday, but who will join them in the final?

Of the 36 previous Heineken Cup semi-finals, 23 have been won by the team with either home ground or home country advantage, 13 by the 'away' side

Reigning champions Toulon have won all 12 previous Heineken Cup games when they have either been at home or had home country advantage, as they will again when they take on Munster in Marseille's Stade Velodrome.

But if there is one team who won't be fazed by that record it is the Irish province, who are competing in a record 11th Heineken semi-final. All four of Munster's last-four triumphs have come as the 'away' side, including two famous victories on French soil against Toulouse in Bordeaux in 2000 and Castres in Beziers two years later.

This might seem like the moneyed French team taking on the Irish underdogs to some, but Munster are pretty much the aristocrats of the competition.

They are appearing in a record 11th semi-final and that is testament to the way they've been able to reinvent themselves and change the way they play.

The fact they have reached the last four despite knowing that Rob Penney is leaving at the end of the season shows how strong their character is, because once you know the head coach is leaving if can have a pretty adverse effect on a side.

They did a demolition job on Toulouse in the quarter-finals - I don't think anyone was expecting that - and although they are away on Sunday they don't have too many worries about going abroad to play.

Toulon, though, are pretty formidable - they are the reigning champions after all.

The latter two are battling injuries to be fit for Sunday but former England fly-half Wilkinson and South Africa wing Habana have both recovered from hamstring injuries.

Toulon might have plenty of cash but it is Wilkinson's work ethic - praised by All Black fly-half Dan Carter last week - that is the template for the club.

He is the epitome of professionalism at all times and if you can't live with it then you're at the wrong club, which makes it a good environment to come into.

Toulon will be very happy he is fit because to lose a match-winner like him - his display during last season's quarter-final for instance was crucial to them winning - would be a major blow.

He was and is their talisman but he is not as indispensable as before because former Australia back Matt Giteau is in good form and could step in at 10 if needed.

The French side have big players everywhere. Former England forward Steffon Armitage showed he is in fine form with a man-of-the-match performance in the quarter-final win over Leinster, while Juan Martin Fernandez Lobbe is a warrior alongside him in the back row.

In front of them they've got the likes of Carl Hayman, Botha, Martin Castrogiovanni and Andrew Sheridan, so there's no shortage of power.

What they've built is little short of amazing, although it could have been a house of cards.

The whole of French rugby is awash with money, so it takes more than just cash to get to the top, and Toulon is a club with great support.

Their fans are as tribal as anyone's and they've built on that to create the club we see now.

Munster may have changed their style to a more open game-plan since they were dominating Europe in the early 2000s [Munster reached four finals and five other semi-finals between 2000 and 2010], but when they are together they can overcome pretty much anything.

When Ronan O'Gara, who was the king of steering a team around the park, retired, Penney did not have a like-for-like replacement so he changed the style to suit the playmaker he had in Ian Keatley, who is a bit more attacking.

The secret to success is that you have to adapt and reinvent yourself and Munster have done that, but some things never change.

Ireland captain Paul O'Connell, as he has been for over a decade, will once again be at the heart of their effort and the second-rower will lead the side in the absence of the injured Peter O'Mahony.

Munster have learned the hard way how to win in Europe and they now have a great legacy in the Heineken Cup - there is a great deal for them to live up to on Sunday.

The two-time champions have the likes of Simon Zebo out wide which is just as well because to get to finals you have to be able to score tries, and they will have to come up with some magic in Marseille.

Jerry's prediction: Toulon by a score