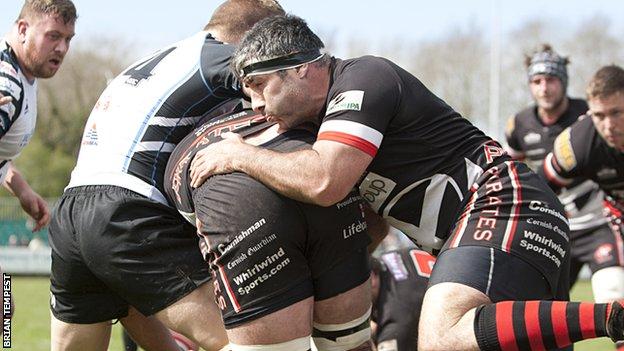 Cornish Pirates coach Gavin Cattle has praised his inexperienced squad despite their 36-3 defeat at high-flying Leeds in their final game of the season.

The Pirates trailed 12-3 until the last 25 minutes when third-placed Leeds scored four tries to coast to the win.

"I know it may seem we were up against it but I'm happy that some of our young lads got that exposure against a top-four championship team," said Cattle.

"For the first 60 minutes we were really competitive."

The result sees the Pirates end the season in sixth place in the Championship for the second successive year.

"We fell foul of the the experience of the Leeds squad in the last 20 minutes," Cattle told BBC Radio Cornwall.

"But I'm really happy with the way we applied ourselves, there was nothing to play for in terms of league points.

"The main thing for us was to give the boys the opportunity to experience something at that level.

"Injuries meant we had to play some people out of position, but the boys that did stuck at it really well and showed the intent on playing fro the shirt, and that's all you can ask at the end of the day."