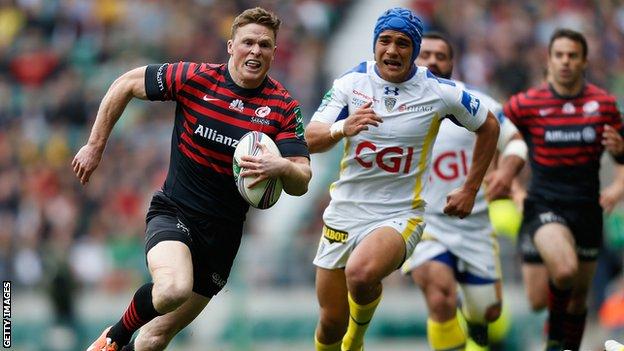 Saracens rampaged into their first ever Heineken Cup final with a record-breaking demolition of 2013 runners-up Clermont Auvergne.

Chris Ashton grabbed the first score on his way to setting a new Heineken Cup record of 11 tries in a season.

Saracens were then awarded a contentious penalty try before Clermont had one disallowed for obstruction.

Owen Farrell's try made it 24-6 at half-time and Ashton, Chris Wyles and Tim Streather completed the rout.

Saracens' reward for setting new Heineken Cup semi-final records for most points scored by a team (46), most tries scored by a team (six) and biggest winning margin (40), will be to face the winner of Sunday's second semi-final between Toulon and Munster in the final in Cardiff on 24 May.

Luck was certainly on Saracens' side initially, but it was the ferocity of their defence in both the tackle and at the breakdown, with Namibia's man of the match Jacques Burger leading the way, that ultimately led to humiliation for French side Clermont.

When Saracens created opportunities they invariably took them and Ashton boosted his chances of an England recall with the sort of all-action display that marked him out when he first burst onto the union scene after switching from league.

He got the scoring under way in the seventh minute as he finished off a fine move, in which livewire hooker Schalk Brits featured twice, and although Morgan Parra slotted a penalty for Clermont soon after, that was as close as they were to get.

Referee Nigel Owens decided a try would probably have been scored, awarded the penalty try and sent James to the sin bin.

Ten minutes later Clermont centre Benson Stanley had a try disallowed for an obstruction earlier in the move by flanker Damien Chouly on Saracens fly-half Farrell, and from that point there was only going to be one winner.

The Londoners were lucky as Farrell was unable to gather an inside pass from Ashton but instead kneed the ball ahead and won the race to touch down.

Alex Goode, who only missed one shot at goal all day, landed the conversion to make it 24-6 at half-time and Saracens were rarely troubled after the break.

Clermont - the nearly men of European rugby having lost 10 finals before eventually winning the French title - arrived with weaponry all over the park.

But they struggled to get the likes of Napolioni Nalaga, Wesley Fofana and Sitiveni Sivivatu into the game as the Saracens defence brought the French side to a shuddering halt time and again.

Saracens' fourth try did not come until after the hour mark, with Ashton hacking ahead after just the latest in a long list of fine defensive work from Burger and Brits, and it took him past the previous try scoring record, set by Sebastien Carrat of Brive in the 1996-97 season.

Sarries finished in style with replacements Wyles and Streather both scoring late tries and the Londoners now have the chance to become champions of Europe for the first ever time in the last ever Heineken Cup, which will be succeeded by the European Rugby Champions Cup next season.