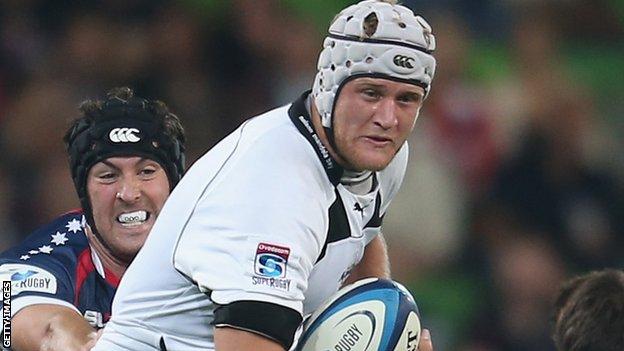 The Ospreys have turned to the 22-year-old because their British and Irish Lions lock Ian Evans is leaving for French side Toulon in the summer.

Bernardo is seen as a future Springbok and played 10 games for the Southern Kings in last season's Super 15.

"Rynier is an exciting addition and something of a coup for the Ospreys," said operations manager Andy Lloyd.

"He is highly respected in his home country and comes with a strong reputation as a traditional second-row who tackles well, hits rucks, and has the all-round physical edge that you expect from a South African in that position.

It's a really positive signing for us

"It's a really positive signing for us.

"It's important that we have additional options in the squad, not only to keep the likes of Alun Wyn Jones and Lloyd Peers on their toes, but to also support the next tier of locks coming through the system."

Bernardo is the fourth recruit confirmed by Ospreys for next season.

The region have already announced the arrival of Fiji centre Josh Matavesi from Worcester, Welsh international full-back Dan Evans and hooker Sam Parry from the Dragons.

Now with Eastern Province the 6ft 6in, 17st 11lb forward says he is relishing the opportunity to play in Wales.

"This is a fantastic opportunity for me, personally and professionally, and I'm really excited about arriving in Wales this summer," he said.

"The Ospreys are a great team used to competing at the top end of the Pro12, with some great players, and I'm looking forward to being a part of a young and talented squad there.

"It's a big challenge for me, but I can't wait to get started. Hopefully I'll be able to make a big impression and help the team to more success, domestically and in European competition."