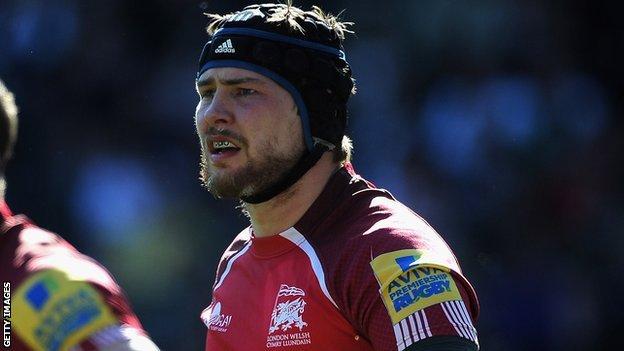 Worcester Warriors have taken their total of new signings for next season to 15 after agreeing deals to bring in Gloucester hooker Dan George and Leicester loose-head prop Ryan Bower.

George, 27, only signed for Gloucester a year ago after suffering relegation with London Welsh.

Bower, 23, has spent two loan spells at Championship side Nottingham since making his Tigers debut in 2010.

Liverpool-born O'Donnell, 28, who arrived from Rotherham on a two-year contract in 2012, has signed a new, unspecified-length contract.

With two matches left this season, and Warriors still in with a slim chance of staying in the Premiership, director of rugby Dean Ryan and assistant Carl Hogg have now brought in an entire new team - with the prospect of more signings and departures to come.

"I am pleased with how the forward pack is shaping up ahead of next season," said Ryan. "The arrival of Ryan and Dan, who both received international recognition in the early part of their career, will see us strengthen our options further.

"Rob has made the most of the opportunities he has been presented with this season and will continue to be an important part of the squad next season."

George, who will be Worcester's third summer signing from Gloucester, following back-row forward Matt Cox and centre Ryan Mills, is the more experienced of the latest two additions.

He played for Llanelli and Carmarthen Quins before joining London Welsh.

"It's exciting times ahead for the club," said George. "Having met with Dean and Carl, they have a very specific view in which direction they want the club to go in. Under their guidance the future of Worcester rugby looks good."

Nuneaton-born Bower, a product of the Leicester Tigers academy, also admitted that Ryan had sold the club well to him, as he follows in the footsteps of Tigers stand-off Ryan Lamb, who arrived from Welford Road in February.

"Dean's vision is something that really appealed to me," said Bower. "I jumped at the chance to be part of it and play a role in the long-term success of the club.

"I have immensely enjoyed my time at Leicester and must thank Richard Cockerill and the rest of the backroom staff, who have helped me develop my game during my time at Welford Road.

"I would also like to thank all involved at Nottingham. I really appreciate the opportunity they gave me to play regular Championship rugby and develop as a young player."