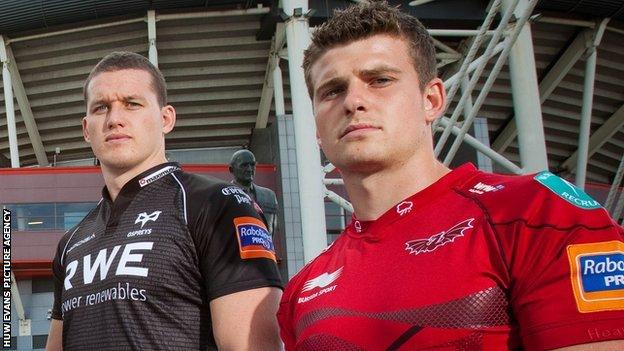 Wales have been given a pre-South Africa tour boost with lock Ian Evans set to return from a ban for Ospreys at Zebre in the Pro12 on Thursday.

And Scarlets centre Scott Williams (shoulder) could be back before the season's end, but hooker team-mate Emyr Phillips (shoulder) is out.

Williams suffered his blow in Wales' Six Nations loss to Ireland in February.

Evans, 29, missed the tournament after stamping on a Leinster player.

The 2013 British and Irish Lion's offence led to a 12-week suspension and in his absence, Scarlet Jake Ball won four Wales caps, two as a starter.

Evans, who has won 32 Wales caps, joins Toulon at the end of the season.

He was dismissed for stamping on Leinster's Mike McCarthy by referee Romain Poite on 17 January and the French official will take charge of Wales' opening Test against the Springboks in Durban on 14 June.

Cardiff Blue Bradley Davies has also recovered from an ankle injury to bring Wales' lock contingent back to full strength ahead of the trip to face the team who lie second behind New Zealand in the International Rugby Board rankings.

Evans and Davies join Osprey Alun Wyn Jones, Ball and Perpignan's Luke Charteris in being in contention for second-row places against South Africa.

Scarlets hope Williams could be back for their final game of the season, their Pro12 clash against Cardiff Blues in Llanelli on Saturday, 10 May.

Warren Gatland's Wales side begin their tour against Eastern Province Kings in Port Elizabeth on 10 June and it ends at Nelspruit on 21 June in the second Test.

Skipper and flanker Sam Warburton and full-back and fellow Blue Leigh Halfpenny - who starred for the Lions in their 2-1 Test series win over Australia - are sidelined by shoulder injuries.

And there are doubts over Warburton's back-row rival Justin Tipuric and scrum-half Rhys Webb, both Ospreys, who have respective shoulder and knee problems.

With Osprey Richard Hibbard a major doubt because of shoulder trouble, Phillips could have been in line to add to his three Wales caps.

But his shoulder tear during Scarlets' 27-20 Pro12 win over Zebre on 12 April has ended those hopes.

Gatland may now look at alternatives to back up another Scarlets hooker in Ken Owens.

That could lead to a recall for Cardiff Blue Matthew Rees, the former Wales captain who returned in March after successful testicular cancer treatment.