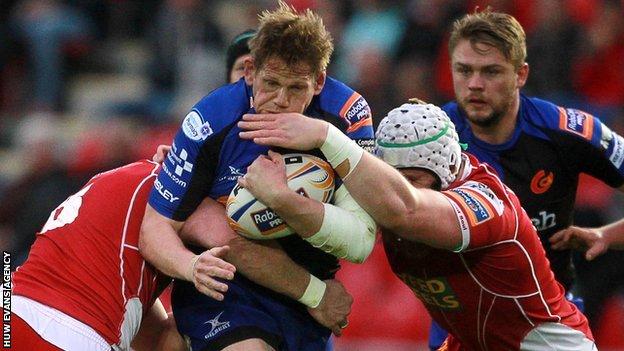 Scarlets secured a place in next season's European Rugby Champions Cup with a bonus-point win over Newport Gwent Dragons.

The hosts ran in four tries in an entertaining and feisty encounter.

Simon Easterby's side will finish second of the Welsh teams in the Pro12 behind Ospreys, no matter what happens in the final round of the regular season when all games kick off at 18:30 BST on Saturday, 10 May.

Scarlets host Cardiff Blues that day while Lyn Jones' Dragons, who will finish last of Wales' teams, take on Treviso at Rodney Parade.

Visiting fly-half Kris Burton put the visitors into an early lead with a penalty by hitting the target at his second attempt of the evening.

But it was a short-lived lead as, after Priestland made ground, lock Ball was on hand to drive on before scoring with an outstretched arm.

Priestland added the conversion and put over a penalty, and kicked conversions to the two Scarlets tries that followed in the opening period.

However, just when the home side may have been eyeing up a cricket score, the visitors struck back.

Priestland gifted an interception pass to Burton, who made 45 metres before feeding Jack Dixon who in turn gave Prydie the scoring pass.

Burton's conversion signalled the end of the first half that ended with the hosts 24-13 ahead.

A Burton penalty reduced the deficit again two minutes after the break, but the Scarlets pack - with flanker Josh Turnbull outstanding - always had the upper hand.

And hooker Owens was rewarded for an impressive contribution as he used pace and power to crash over.

Hooker Rhys Thomas was sin-binned after entering a maul from the wrong angle, but in his absence his side managed to score again.

Number eight Taulupe Faletau stole possession at a ruck and Prydie made the most of a cross-kick to out-pace the remaining defence for Tovey to add the extra points.

But the night belonged to the hosts as Priestland kicked a further penalty to round off the win.