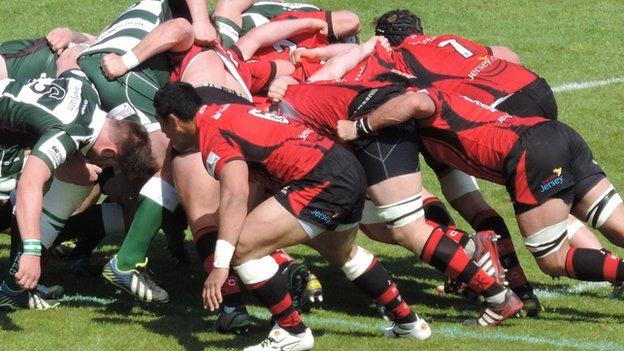 Jersey ran in six tries as they beat rivals Guernsey 38-7 to lift the Siam Cup for the sixth time in a row.

Backs Nicky Griffiths, Ed Dawson and Mark Foster all touched down to give the Reds a 19-0 lead at the break.

Guernsey scrum-half Dale Rutledge grabbed a consolation try for the hosts in the final seconds, but it was far too little, too late.

Guernsey last won the cup in 2008 but, since then, Jersey have turned fully professional and risen through the divisions to the second tier of English rugby - this game coming just a week after securing their Championship survival.

The hard-working hosts went behind when they failed to stop Griffiths' burst, but the lively Welsh scrum-half was only to last a quarter of the game before hobbling off injured.

Dawson's try, followed by Foster's score in the corner, gave Jersey a well-deserved half time lead, which they never looked likely to lose.

Flanker Buckle claimed their fourth try of the afternoon after good work from a powerful pack and, when replacement prop Lockwood crashed over from a rolling maul, there was no way back for the Green and Whites.

Tom Brown was sent clear for the visitors' sixth to extend the advantage to 38-0 but back came Guernsey with their best spell of pressure in the closing minutes.

Rutledge made it pay when he spotted a gap in the Jersey defensive line to get his side on the scoreboard with seconds remaining.

As well as the senior men's clash, the Channel Island rivals also went head-to-head in the veterans', second team and women's matches.

Jersey battled back from behind to win the veterans' match 33-24 and also clinched the second team encounter 43-24, but Guernsey won the women's clash 27-10.