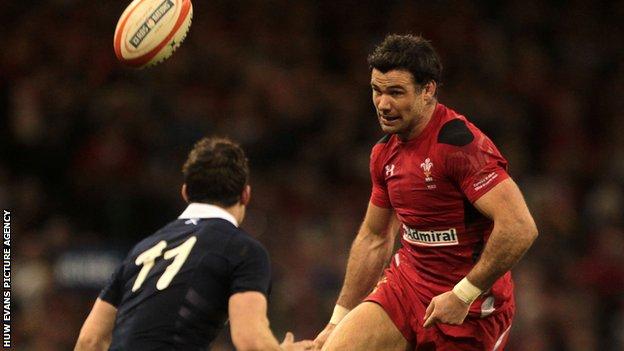 Wales will play the Springboks in two Test matches, in Durban on 14 June and Nelspruit on 21 June.

Despite a disappointing Six Nations, Racing Metro player Phillips is positive Wales can make an impression against the Springboks.

"It's a great opportunity for us to go down there and get a big scalp," Phillips said.

"Scotland went down there last year and pushed them very, very close.

"We obviously haven't beaten them but we've pushed them all the way.

"Hopefully we can really push on and get a result this year. There's no point going down there otherwise."

Wales have lost 14 consecutive games against the South Africans since their one and only victory over the Springboks in 1999.

In their most recent meeting in November 2013 at the Millennium Stadium, South Africa won 24-15 in a pulsating, physical encounter.

Captain and flanker Sam Warburton and full-back and fellow Blue Leigh Halfpenny will miss the tour because of shoulder injuries.

There are doubts over Warburton's back-row rival Justin Tipuric and scrum-half Rhys Webb, both Ospreys, who have respective shoulder and knee problems.

Ospreys hooker Richard Hibbard, who will join Gloucester at the end of the season, is also a major doubt because of shoulder trouble.

But Scarlets centre Scott Williams, who suffered a shoulder injury in Wales' Six Nations loss to Ireland in February, could be back before the season's end.

Lock Ian Evans is set to return from a 12-week suspension for Ospreys at Zebre in the Pro12 on Thursday.

Evans, 29, missed the Six Nations after being banned for stamping on a Leinster player.

Warren Gatland's side begin their tour against Eastern Province Kings in Port Elizabeth on 10 June ahead of the two Springbok encounters.

"It's going to be a massive test for us of course," Phillips told Radio Wales Sport.

"We were all a little bit disappointed with the Six Nations but it's a chance for us to get back on track and prove people wrong and go down there and get a big result."

Before Wales' summer tour Phillips will be in action for Racing Metro as they chase a place in the Top 14 play-offs with a game away to Montpellier on Saturday.

Following a turbulent spell at Bayonne which culminated in his dismissal, Phillips says he is much more settled in Paris both on and off the pitch.

"It's a lot different to my previous club," Phillips said.

"Being the only current international there was a lot of pressure I suppose.

"If we won it was someone else's fault, if we lost it was my fault.

"But it's great to be mates here and current internationals and it's been great so far. Hopefully we can carry it going until the end of the season."