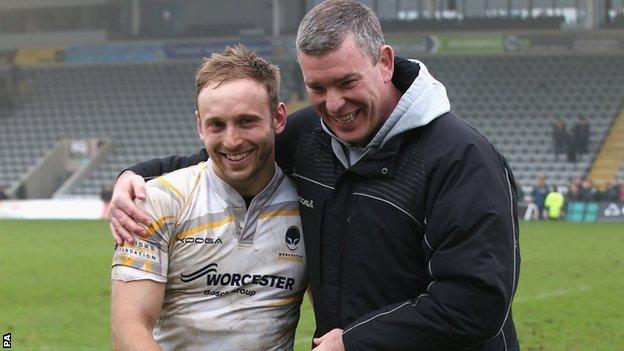 Despite bottom club Worcester's season-long battle against relegation, Pennell is on the six-man Premiership Player of the Year shortlist.

And Ryan, who first suggested Pennell, 27, for an England call-up six months ago, is still backing his player.

"It would be pretty foolish to ignore him," he told BBC Hereford & Worcester.

"His nomination for the award is well deserved. And I hope it goes on to be something more than that.

"There are a number of challenges at the end of the season which the England selectors are going to have to look at.

"And I'd be gobsmacked if he's not at least in the conversation round the selectors' table.

"He's getting real attention now and deservedly so. He's a quality player.

"And I don't think anyone in the game would question that he's been one of the form Premiership players."

Pennell, whose team will be relegated if they do not win at leaders Saracens on Saturday, has been nominated for the Premiership Player of the Season award alongside Sale flanker Dan Braid, Harlequins full-back Mike Brown, Saracens flanker Jacques Burger, Leicester centre Niki Goneva and Northampton forward Samu Manoa.

With two rounds of fixtures to go, Pennell leads the league in terms of most carries (253), and is well clear in metres made (1527), almost 200 more than the man in second, Gloucester's Rob Cook.

Only his Worcester team-mate Josh Drauniniu (55) is ahead of him in beating defenders, Pennell currently standing one shy on 54.