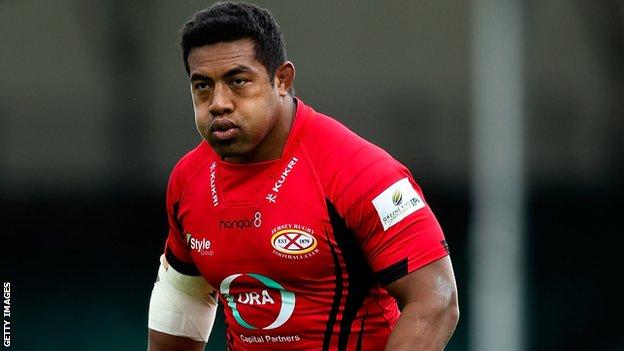 The 30-year-old joined Jersey and has helped them avoid relegation in two successive seasons.

"He's making the step up to the Premiership. It's a fantastic achievement by Elvis and he's put in the hard work," Jersey boss Harvey Biljon told BBC Radio Jersey.

He has has 10 caps for his country, the last of which came in the last November.

He played 27 times for Jersey in just over a season in the Championship, scoring one try, and joins the Chiefs after hooker Chris Whitehead in March having suffered a neck injury.

"We looked at him quite a lot last year because there was a potential of an early release from his Jersey contract when Simon Alcott had his injury," Exeter head coach Rob Baxter told BBC Sport.

"He was one of the options that was available, but we eventually went for Greg Bateman.

"But we'd done a fair bit of work on Elvis and we liked what we saw, and we've kept an eye over him over an extended period and seen him improve all the time, he looks a very good performer."

And Baxter says he was particularly impressed with what he saw when Taione played for Tonga against Scotland last November.

"In the Scotland game he put in some real big hits which impacted on the game," he added.

"He's a bit different to our other hookers in he's a straight up and down guy and likes to make big hard tackles.

"He's really enthusiastic on working on his set-piece game, in particular scrums, which is more important in the northern hemisphere than when he was in the southern hemisphere.

"He's desperate to play for Tonga in the World Cup and he was aware of where he is now and how he wants to develop.

"I think he'll really fit in well with what we're trying to achieve at Exeter."