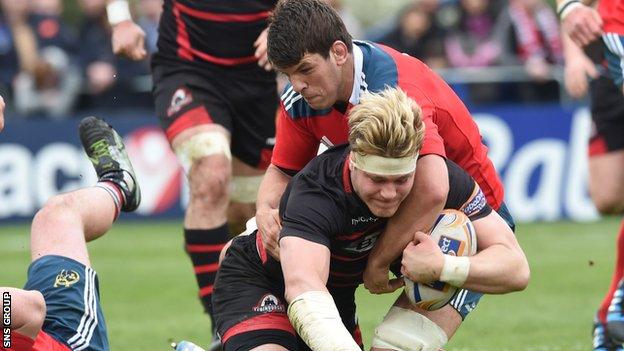 Munster ruthlessly overpowered Edinburgh at Meggetland to stay within a point of second-place in the Pro12.

Carl Bezuidenhout and WP Nel touched down for the home side but tries from Andrew Conway and Denis Hurley and the kicking of JJ Hanrahan had the visitors 20-12 ahead at the interval.

Penalty tries were awarded either side of Damien Varley and Duncan Williams scores as Munster turned the screw.

And Tommy O'Donnell rubbed salt in the home wounds with a seventh try late on.

With Munster assured of a play-off place before kick-off they go into next weekend's home game with Ulster knowing a home tie in the semi-finals is possible in the unlikely event of Glasgow slipping up against Zebre.

And this comfortable win showed the visitors were in no mood to feel sorry for themselves after their last-four defeat to Toulon in the Heineken Cup.

Edinburgh were first on the scoreboard as Jack Cuthbert and Matt Scott combined to set up Bezuidenhout and the fly-half bustled over despite being grappled by Simon Zebo.

Greig Laidlaw, playing his last home game before his move to Gloucester, missed the conversion from touchline.

Hanrahan reduced the deficit with a penalty before Munster stretched the play with a fine passing move and a strong hand-off allowed inside runner Conway to breeze in under the posts.

Edinburgh responded well as Cuthbert bulldozed his way to within inches of the line and WP Nel was able to squirm his way over, with Laidlaw knocking over the conversion.

But that was to be the last of the home scoring with Laidlaw failing to follow the example of Hanrahan's penalty that had nudged the visitors ahead again.

And, on the stroke of half-time, Hurley waltzed past two weak tackles to score as Edinburgh found themselves outnumbered, with Hanrahan adding the extras.

The second half was a very one-sided affair as the hosts made life difficult for themselves with some poor decision-making.

Replacement hooker Varley finished off a driving maul after Munster had been camped inside the home 22 and the first penalty try followed as a re-set five metre scrum rumbled forward. Hanrahan continued his unerring kicking with both conversions.

There was a brief break in play due to a fire in a nearby van and Edinburgh gamely tried to get a foothold but were let down by handling errors when in dangerous positions.

Williams was next to score as he gathered an inside ball out of a tackle, with Hanrahan continuing his fine kicking.

There was muted applause for Laidlaw as he trudged off on 70 minutes but the visitors had no time for sentiment as they kept up the pressure.

Grant Gilchrist was yellow-carded for a last man knock-on as Munster looked to go over in the corner, resulting in the second penalty-try.

And, in the last move of the game, O'Donnell plunged over in the corner, with Conor Murray knocking over both of the late conversions.