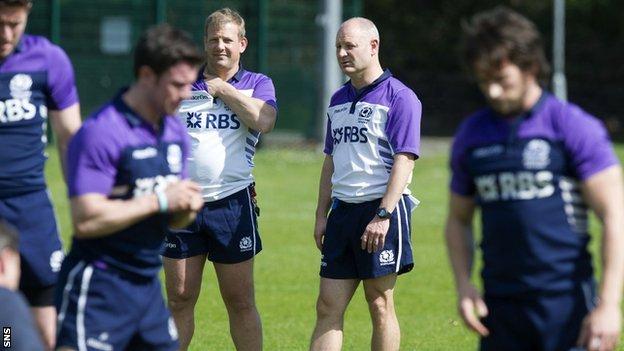 Coach Stephen Gemmell has warned that he and the Scotland Sevens team are running out of chances to prove they can challenge for Glasgow 2014 medals.

Scotstoun hosts the Emirates Airline Glasgow Sevens this weekend, with the final leg of the 2013/14 HSBC Sevens World Series in London next week.

"We have said since we finished sixth in Delhi that we were a genuine medal opportunity," he told BBC Scotland.

"But we haven't been consistently showing that level of performance."

And the Ayrshireman added: "The opportunities to do that are running out.

"We have to start putting down a marker. There are no second chances now, either for me as a coach or for the players.

"We announce our Commonwealth Games squad within two weeks of London finishing and I need to make informed decisions that can support our desire to medal."

For the Commonwealth Games matches, which will be played at Ibrox Stadium this summer, Scotland are in the same pool as New Zealand, Canada and Nigeria.

And Gemmell, who was in charge of the team at the Delhi Games, wants to use the Glasgow Sevens tournament as a platform for the players to begin a steady run of form.

"It's been one of those seasons," he said. "It's been inconsistent and, as a result of that, it's been disappointing.

"We had one top-eight finish in Dubai this year. Other than that, we've been in the 8-12 bracket.

"We need to break out of that and this weekend gives us a real opportunity.

"We've got the strongest squad we've had this season - bringing in the likes of Richie Vernon and Nick De Luca makes a big difference.

"We've got a fully-fit squad to select from, which is nice.

"To host a World Series event here in Scotland is wonderful. It's a great opportunity for the Scotland team to show what they're about.

"It's a wonderful event. We should be proud that we invented the game in Scotland and I'm proud that I'm coaching the national team in Glasgow."

Gemmell, in his second spell as Scotland's sevens coach, highlighted the standard set by the world's top three teams - New Zealand, South Africa and Fiji - plus Australia and England.

If we want to be realistic medal contenders come Glasgow 2014, we need to be qualifying out our pool

All five are in action over the weekend and each boasts a greater number of sevens specialists in their ranks.

"The game is a confrontational, physical sport where pace and power are key factors allied to a quality skill set," explained Gemmell.

"It is a hugely dynamic, explosive powerful sport. That brings challenges to us as a nation because we don't have lots of those types of players.

"But, if we want to be realistic medal contenders come Glasgow 2014, we need to be qualifying out our pool.

"We need to be in the top eight. We need to finish in the top two in day one and then get a performance in day two. We need to start getting results and perform in three games on Saturday."

Asked about his Commonwealth Games squad, Gemmell said: "We will put out the strongest sevens team that Scotland can put out.

"That doesn't mean that all the household names in Scottish rugby that play 15s will be willing to or are able to transfer into sevens.

"But I can ensure that we will be putting out a team that is capable of medalling in Glasgow.

"That will be a mixture of our current squad and players from Glasgow and Edinburgh who can add value to what we've got.

"Primarily, it will be players who have a history of playing sevens and probably one of the biggest areas we get compromised on is physicality.