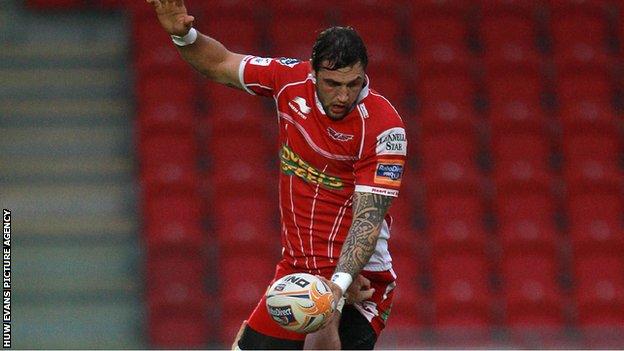 Scarlets secured their place in next season's European Rugby Champions Cup with a 34-23 victory.

"I'm pleased for him, and he's put his hand up and caused the national selectors a bit of a headache."

He is already without open side flanker Sam Warburton with Ospreys number seven Justin Tipuric also likely to miss the trip to have surgery on a shoulder problem.

Gatland has also hinted he might select Racing Metro's Dan Lydiate at openside to combat the bulk of South Africa's back row - a move that would leave a vacancy on the blindside which five-times capped Turnbull could fill.

Wilson said the 26-year-old's impressive display against the Dragons underlined his credentials for the tour.

"He's got that versatility he's played six, seven and eight for us this season and shown he can do the three," he said.

" I think he's getting better and better and he knows what areas of his game he has to continually work on, but for me his work rate is second to none.

"Late in the game he was chasing back and defending - and we've seen him doing that all season."

However, after helping Scarlets secure their place in Europe's new top-tier competition for the 2014-15 season, Turnbull will not be playing in the Champions' Cup.

He joins Cardiff Blues at the end of the season, with the team from the Welsh capital having failed to qualify for the tournament.

Another irony is that his last game for the Scarlets is likely to be against the Blues on 10 May at Parc y Scarlets.