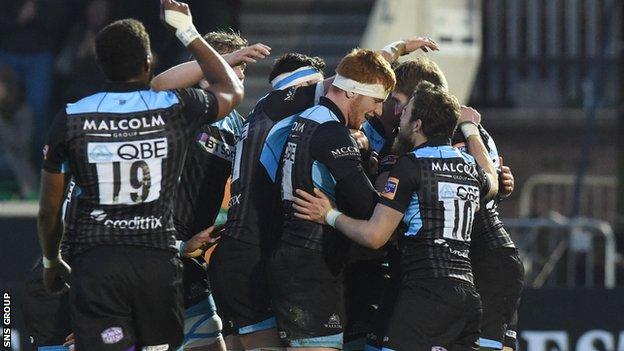 Head coach Gregor Townsend hailed an improved defensive display as Glasgow moved within a win of a home semi-final with a 38-16 Pro12 defeat of Treviso.

"It was a tremendous performance," he told BBC Scotland. "One of the best I've been involved with for the club.

"Our defence has been a big part of our success this season.

"We dropped our standards against Edinburgh, so we worked hard on that area and it wasn't until two minutes to go that we conceded a penalty try."

Tommy Seymour scored a hat-trick of tries in Italy, with Gordon Reid also touching down for a bonus point.

"We got a breakaway try and then we scored three cracking tries in the second half," added a delighted Townsend. "It was great to get that fourth try and the bonus point.

"We need to beat Zebre next week, simple as that. We don't need to get a bonus point.

"If Munster were to lose to Edinburgh and only pick up one [losing bonus] point then we'd have a home semi-final before the Zebre game. So we're cheering on Edinburgh.

"We know we have to keep the momentum going and produce another very good performance next week."

Seven wins on the trot have moved the Warriors into second place in the Pro12 table, with defending champions Leinster leading the way and Munster and Ulster making up the play-off places.

"The players have worked really hard for these seven wins," said Townsend. "We've used something like 35 players in this period and those coming in last night did really well.

"There is good competition for places. You've got to change the team if you want to be fit and fresh and dynamic at the end of the season.

"We've built really good momentum and got ourselves in a wonderful position. A win gets us a home semi-final and that would be fantastic for rugby in the west of Scotland.

"But Zebre have shown they are a much-improved side recently - they have beaten Ospreys and Edinburgh - and we'll need to prepare well."