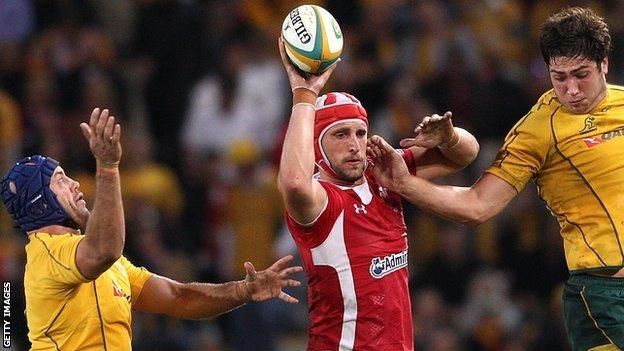 Wales lock Luke Charteris is likely to leave French club Perpignan after they were relegated from the Top 14.

The 31-year-old's agent says the former Newport Gwent Dragons captain, who has spent two seasons in France, could return to a Welsh region.

"We are looking at options in France and possibly Wales," said Christian Abt.

There has also been speculation over the future of James Hook, Charteris' Wales and Perpignan team-mate.

Charteris left Dragons for the Catalan club on a three-year deal ahead of the 2012-13 season after impressing at the 2011 World Cup.

Abt said 6ft 9in Charteris, who has won 46 caps for Wales, is "likely" to leave Perpignan "if we can secure a club in Top 14 or back in Wales".

Perpignan's relegation was confirmed when they were beaten 25-22 by Clermont Auvergne and Oyonnax earned a losing bonus point in a 19-17 defeat at Brive. Biarritz also went down.

Hook, capped 75 times by Wales, joined Perpignan from Ospreys in 2011. His contract runs until 2017, but the club face a decrease in guaranteed income in France's second tier.