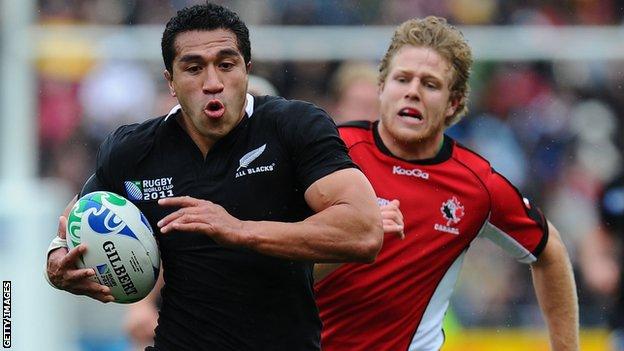 Muliaina, 33, retired from New Zealand duty following the 2011 World Cup after bringing up his caps haul to 100.

The full-back is currently in his second spell with the Waikato-based Chiefs after a stint in Japan.

"I don't think I need to point out how huge it is to have Mils Muliaina as our first All Black coming to represent Connacht," said coach Pat Lam.

Samoan-born Muliaina played under Lam at Auckland from 2004-05 and with the Asia Pacific Barbarians in 2012.

"The second ever All Black and the first ever back to reach 100 Test matches is some achievement but what's incredible about Mils is the passion and professionalism he brings whenever he plays," added the Connacht coach.

After returning from his two-year stint in Japan, Muliaina played six games for the defending Super Rugby champions this year before opting to undergo surgery on an elbow injury.

Connacht are confident that he will back to full fitness before the start of next season's Pro12 campaign.

Muliaina described his Connacht move as an "exciting time".

Connacht also want him to undertake a "player-mentor" role at a club which has a number of exciting players on the fringes of the Ireland senior squad.

"I have a good understanding about my role and what is expected of me at Connacht," added the All Blacks great.

"I've heard a lot about the talented young backs at the club - guys like Robbie Henshaw - and I'm keen to help anywhere I can, both on and off the field.

"Right now I'm fully focused on my recovery and getting myself ready to hit the ground running when I arrive in Ireland."