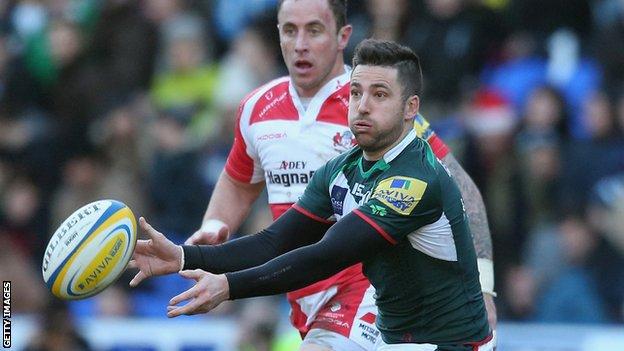 Ian Humphreys is back at Ulster after the fly-half left London Irish to sign a two-year deal with his home province.

The 32-year-old former Leicester Tigers player moved from Ulster to the Exiles in 2012.

"I have loved my time at London Irish but when the unexpected opportunity to come home arose, it was a very easy decision to make," said Humphreys.

"It's exciting to be part of a squad that's challenging in Europe and is at the top of the Pro12 every year."

He added: "My wife and I are very much family people and we enjoy being in Northern Ireland.

"As well as a strong team, Ravenhill has been transformed since I left two years ago. Everyone in the Premiership has heard about it and seen pictures of the new facilities. It is just phenomenal how good the new stadium is.

"I am realistic. I know that Paddy Jackson is one of the best young players in Ireland, but I am competitive. It is up to me to push him and hopefully that will bring out the best in both of us."

Humphreys played for Ulster Under-21s as well as representing Ireland at Under-19 and 21 level before moving to the Premiership to join Leicester.

Following three seasons at Welford Road he returned to Ravenhill in 2008 and made 110 appearances for Ulster, scoring 617 points.

Ulster director of rugby David Humphreys is delighted to have his brother back in the squad.

"With more than 60 appearances in the Premiership and over 100 caps for Ulster, Ian brings significant experience to our squad in the highly important position of fly-half," he said.

"He has learned a great deal in the past two seasons working with coaches like Brian Smith and Shaun Edwards and that knowledge can only benefit the young players we have coming through.

"With Paddy Jackson playing an increasingly important role with Ireland, Ian gives us another option at fly-half, something which is highly important if the team is going to be successful in the future."