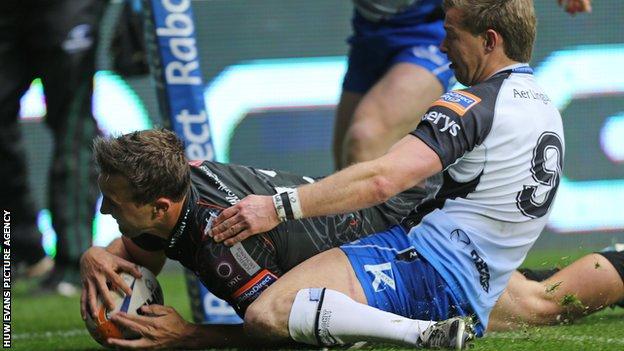 The Ospreys ended their disappointing Pro12 campaign with a comfortable win over a disjointed Connacht side.

The Ospreys' hopes of making the top four were dashed by a shock 30-27 defeat to Zebre in Italy on 1 May as the Welsh club had to be satisfied with fifth spot in the table for the second successive season.

After a four-match winning run in February and March, Connacht's season ended on something of a low with five straight defeats which dropped them to a disappointing 10th in the table, with only the two Italian clubs below them.

Hassler squandered a glorious early chance for the Ospreys as he cut inside and failed to field a Justin Tipuric pass when remaining on the outside would have surely resulted in a guaranteed score.

Connacht were ahead after Miah Nikora's opening penalty but Canadian wing Hassler quickly atoned for his mistake as he barged pass some woeful Connacht tackling to score in the 13th minute after Kieran Marmion had lost possession on halfway.

The Irish province regained the lead five minutes later as full-back Leader brushed past a weak Hassler tackle after Danie Poolman had fielded a Nikora's cross-kick.

However, the Connacht defence was looking decidedly porous every time the Ospreys attack and centre Beck notched his opening try in the 27th minute after some fast hands from Dan Biggar and Sam Davies.

With Connacht's scrum under severe pressure, Biggar added another three points and the home lead became 24-8 on 36 minutes as lock and captain Jones brushed past some more weak tackling, although they was a question mark about his grounding as he appeared to lose control of the ball.

Connacht gave themselves a glimmer of hope going into the break as prop Buckley finished a rolling maul under the posts after a line-out drive, with Nikora adding the conversion.

However, the pattern of the first half was maintained in the second period as the Ospreys looked capable of scoring tries every time they attack.

Beck notched his second touchdown on 45 minute as he ran through unopposed from the edge of Connacht's 22 and Smith's try on the hour mark ended the game as a contest.

By that stage, Ian Evans had departed the fray in his final Ospreys game before his summer move to Toulon.

Gilsenan's try, in his last Connaht game before his move to London Irish, cut the Ospreys advantage to 38-20 but number eight Baker had the final scoring say for the Welsh outfit.