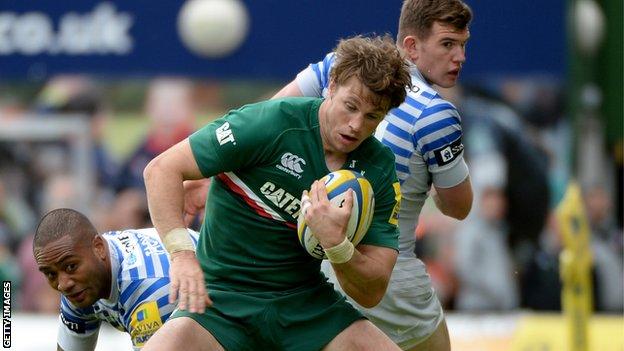 Leicester overcame 14-man Saracens as both sides geared up for the play-offs.

The visitors took an early lead through Ben Spencer's try but Tigers went in ahead at the break thanks to a penalty try and a kick from Owen Williams.

Despite Graham Kitchener's score and a numerical advantage, Jack Wilson and Spencer tries set up a tense finale.

The flanker was sent off early in the second half when the touch judge indicated he had gouged the eye of Leicester hooker Neil Briggs - although Saracens have since said they will seek to have the decision overturned.

Mark McCall's side are set to entertain Harlequins, who pipped Bath to fourth place with a dramatic 19-16 victory on the final day, in the Premiership play-off semi-finals next Saturday. Leicester, meanwhile, will travel to Northampton on Friday.

Both sides were under-strength, with Premiership leaders Saracens resting most of their top players with a Heineken Cup final and possibly the Premiership final on the horizon.

The visitors took the lead after some bright play resulted in scrum-half Ben Spencer making a break through the front of a ruck. Although he was held short of the line he reached and put the ball down over the line.

Former England fly-half Charlie Hodgson missed the conversion on an afternoon when the strong wind made it difficult for the kickers, and three minutes later Williams pulled three points back with a penalty from in front of the posts.

Hodgson extended Sarries' lead with a penalty but Leicester were ahead at half-time as referee Greg Garner awarded a penalty try for an infringement at the scrum and Toby Flood added the conversion.

Within four minutes of the restart at Welford Road that lead had become 17-8 - and Saracens were reduced to 13 men.

First winger Tagicakibau was sin-binned for a tip tackle on Marcos Ayerza, and Leicester's forwards rumbled towards the line, with Flood putting Tuilagi over under the posts.

And Melck was sent off soon afterwards for what appeared to be eye gouging.

Four minutes later Leicester got their third try in nine minutes as Niall Morris made a break before passing inside for fellow winger Scully to score, with Flood adding the conversion.

Saracens hit back in the 54th minute, the referee awarding them a penalty try after the Tigers had collapsed a terrific rolling maul and Spencer converted to make it 24-15.

After Kitchener extended Leicester's lead following a patient build up, England and Lions flanker Tom Croft made his return from eight months out with a knee injury, replacing Steve Mafi.

Croft had hardly got on the field when Leicester number eight Thomas Waldrom gave away possession and Saracens winger Wilson scored his side's third try after debutant Maro Itoje showed strength and offloaded.

With four minutes left Spencer intercepted a pass from Waldrom and ran 70 yards to score in the right corner before converting to close the gap to four points, but the Tigers were able to close out the victory.

"Saracens and Northampton have been the best sides all year. But we are a good side when we get it right.

"We have done well against Northampton in the last few years - it will be a hell of a game, local derby, semi-final. All the pressure is on them.

"They have had the season of their lives and they have got to finish it off. If you get to this stage you have worked hard, so you want to try and win it.

"Play-offs are brutal. You can be top and lose a semi-final. It's heartbreaking and we have all been there. We want to try and win the thing."

"To have the team that was out there, with a number of 18 and 19-year-olds in it and people playing for Saracens for the first time, I thought they were magnificent.

"We were disappointed with how we played in last season's semi-final.

"That disappointment has been there for 12 months, and all our focus is going to be on our preparation for Quins. Whatever happens the week after [the Heineken Cup final v Toulon] is irrelevant.

"We are desperate to get through to the final."