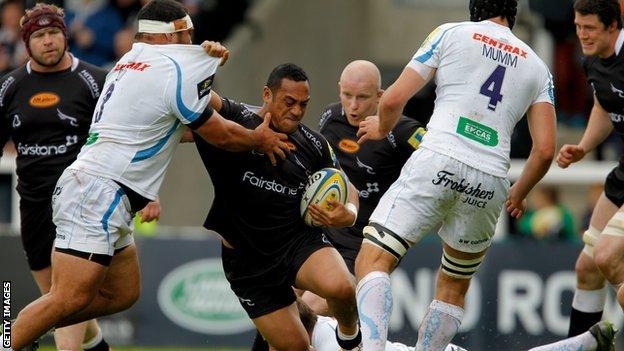 Exeter Chiefs ran in three tries to clinch eighth place in the Premiership and inflict a 16th straight league defeat on Newcastle Falcons.

The hosts were rewarded for a strong start by two Joel Hodgson penalties, but they were behind for the majority.

Luke Cowan-Dickie and Ben White scored for the visitors prior to a slow second period at a sodden Kingston Park.

There was excitement in the last minute as Exeter's Lesley Vainikolo crossed before a Mark Wilson consolation try.

It ended a miserable first season back in the top flight for Falcons fans, who have not seen their side win a Premiership match since October. Having lost every league game since, they have Worcester, who won only twice all season, to thank for their place in the division next term.

For Exeter, it has been a season of progress as a comfortable mid-table finish came alongside winning their first piece of silverware thanks to March's LV= Cup final victory over Northampton.

In a match with little riding on it, the hosts mastered the wet conditions better early on to forge ahead, but their lead was cut to a point when hooker Cowan-Dickie dropped over the line after an impressive maul.

Henry Slade could not add the extras, but nudged Exeter in front with a penalty soon after. They stretched their advantage before the break, flanker White the beneficiary of patience through the phases, a try improved by Slade.

Falcons struggled to create an opening despite decent possession, with centre Sinoti Sinoti going closest after a powerful break.

Slade's boot pushed Exeter further out of reach, as the second half drifted along in a fashion that is unlikely to have inspired watching England coach Stuart Lancaster.

But there was some cheer before the final whistle when Haydn Thomas offloaded to Vainikolo following a half-break to add unwarranted gloss to the scoreline, a tint removed by Wilson's quick response in the game's final move.

"There will be a different game plan next year.

"It's been a very difficult season for us but we have some new players coming in alongside the Tuilagis [brothers Alesana and Anitelea] and what you will see will be a different side to this season.

"The way we play next season will also be different, it would be stupid not use the capabilities of the players we have signed. We will play with more punch in the back line was well as up front.

"Exeter controlled the game better then we did and took their chances. They were happy to nail us down and play in the right areas and we didn't have that capability."

"It was a really pleasing result. We didn't start very well and were six points down but we recovered to dominate the game and we did the right things when we needed to - we don't always do that.

"We had a chance to take a bonus point at the end which is why we played the way we did and we have to learn to take these chances.

"We're relatively happy with the way the season has gone. We held our own for most of the season and we won a cup. Okay we faded a little at the end but that's hardly surprising."