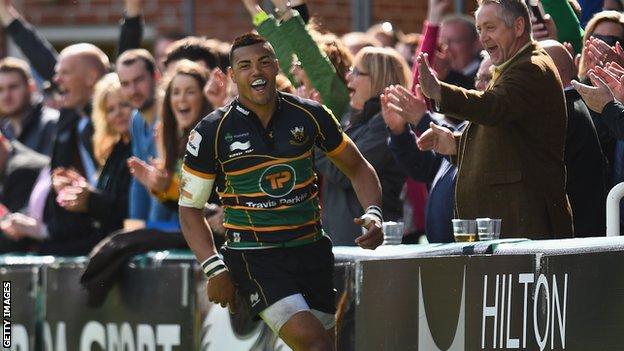 The hosts hit back as George North, Phil Dowson, Stephen Myler and Luther Burrell crossed for 27-13 at half-time.

Saints did not let up as Lee Dickson (two), Ben Foden, North, Ken Pisi, Tom Stephenson and Dowson crossed to set up a May 16 semi-final with Leicester.

The result, which portrayed the gulf in class and endeavour of the two sides, was Jim Mallinder's side's all-time record Premiership win, and will buoy the camp going into the end-of-season play-offs, where they face a Tigers side whom they lost to in last season's final.

Both sides had selected teams with games in the not-so distant future in mind; Wasps made 11 changes in preparation for their play-off against Stade Francais for a place in next season's European Rugby Champions Cup, while Saints made seven changes of their own.

And it was Wasps who settled into their rhythm quicker, taking a surprise lead when Dickson took too long over a box-kick to allow Davies to charge and cross in the fourth minute, before Varndell glided away from the Saints defence to go second in the all-time Premiership tries list, either side of Joe Carlisle's penalty.

But Saints forced their way back into the game and got on the board when George North stepped a Wasps defender to finish off a free-flowing move.

Captain Phil Dowson then finished a maul from a line-out before Myler was put in for a free run to the line for his first try of the season, after an excellent take by Foden, to put Saints ahead for the first time.

And, with Wasps forward Nathan Hughes in the sin-bin, hooker Mike Haywood put in Burrell to cross for the bonus-point try which confirmed their home semi-final before the interval.

The hosts continued to cause the Wasps defence all sorts of problems, with Dickson touching down after a powerful scrum-drive, while England prop Alex Corbisiero, out with a knee injury since October, came off the Northampton bench to give his side a boost before the play-offs.

Sloppy play from Hughes off the scrum then allowed Foden in for an easy try before Dickson got his second, and James Wilson converted one of his five successful kicks to make it 48-13.

Wales winger North then further extended the lead from a solo 60-yard run before Pisi grabbed his side's ninth try as the game almost turned into a training ground exercise.

After Wasps skipper Chris Bell was sin-binned for a tip-tackle came a moment of controversy as Stephenson was awarded a try following a kick-through, despite looking to have knocked on, before Dowson rounded off proceedings in the corner and Wilson converted for their 74th unanswered point.

"This win gives us confidence, but we won't read too much into it.

"Wasps sent a weak side with their minds on next week and we are not daft enough to think otherwise.

"We have got our home semi and after 22 games that is all you can ask for. We know we are in good shape, we are physically and mentally in good shape, but we know it is going to be difficult against Leicester.

"We know they have a good record against us and they will be very confident, but we are looking forward to it."

"We are all pretty embarrassed by that performance.

"It gave us the opportunity to play some players who have not had a lot of game time, but the biggest disappointment was the way we seemed to lack any fight when they got in front."