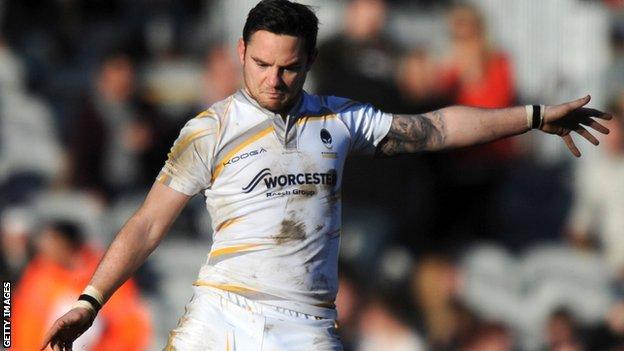 Ryan Lamb scored 18 points, including a late penalty, to beat Gloucester and clinch a second Premiership win of the season for already-relegated Worcester.

The hosts trailed for long spells, but capitalised on the Cherry and Whites serving two spells with 14 players.

England wing Jonny May, who crossed twice, was first in the sin bin before Rob Cook was sent there on 68 minutes.

During that time, Freddie Burns kicked Gloucester into a narrow lead, but Lamb then held his nerve to claim victory.

Worcester's relegation from the Premiership was confirmed after last weekend's defeat at Saracens, and director of rugby Dean Ryan will hope to rebuild his side in the shape of his former club Gloucester, who he led to top-of-the-table finishes in 2007 and 2008.

Since being appointed to replace the sacked Richard Hill at Sixways last April, Ryan has failed to have the desired impact on the park this season.

Warriors' victory at Newcastle in late March had been their only league win in a season in which they set a club record 22 straight Premiership losses, stretching back over a year.

The Cherry and Whites have endured a mediocre season, never threatening to break into the top four and ultimately dropping a place to ninth on the final day courtesy of Exeter's win at Newcastle.

Gloucester scored first when May burst clear inside his own 22 to go over in the left corner, an advantage doubled with their next attack when Shane Monahan squeezed home.

Where Burns failed with his two conversion attempts, former Gloucester player Lamb succeeded with a penalty to cut the deficit to seven points.

Sione Kalamafoni barged his way over for the visitors' third try to make it 17-3, but Worcester quickly hit back after neat work at the line-out allowed a pushover try for flanker Semisi Taulava, on as an early replacement for Mike Williams.

May was sent to the bin just before the interval for playing the ball on the ground after halting an impressive Alex Grove break, and the Warriors took advantage when Lamb got on the end of an excellent move to slide under the posts, before adding the additional two points.

Having gone in just 17-15 down at the break, England Sevens wing Josh Drauniniu then claimed an inch-perfect cross-field kick to put the Warriors ahead for the first time.

But, after Lamb added the extras, May returned from the sin bin in spectacular fashion, finishing a quick break in the left corner to leave Burns an easy kick that put the visitors back in front.

With just over 10 minutes left, Cook was yellow-carded for killing the ball and Lamb punished the infringement to give the hosts a one-point advantage.

Burns then replied, only for Lamb to put the Warriors back in front again.

Gloucester then had the opportunity to win the game two minutes from time but Burns this time pulled his kick to the left - and Worcester had claimed their first home Premiership win in 14 months.

"It was important to end the season on a high. We sent our supporters home happy. At least they now have the bragging rights over Gloucester for the next two years.

"Central to any good rugby club is good people working hard. The moment you come away from that you lose what it's all about. We had lost our way a little bit and we've had to spend the last year making it very clear what sits in the middle of a rugby club and what the expectations are from me and the fans.

"I think we're getting there. People can see it. What's talked about is this growth of a relationship and that's what it is all about. If we go and throw ourselves around stupidly for 80 minutes people will cheer and shout behind us, but the minute you come off that the relationship starts to break down. I think this place is starting to understand that and today was just a great chance to say 'thank you' to those who have stuck with us."

"In patches we can play good rugby, but overall we just aren't good enough. Our discipline again let us down. We failed to put opportunity points on the board and that pretty much sums up the season we've had.

"There were a couple of occasions where I thought we did silly things and just put pressure back on ourselves. We've got to have firm foundations in our game around our set-piece and our defensive organisations.

"The players have stuck by it and tried hard, but for lots of different reasons we're just not where we need to be and it's disappointing to come up here and get that result."