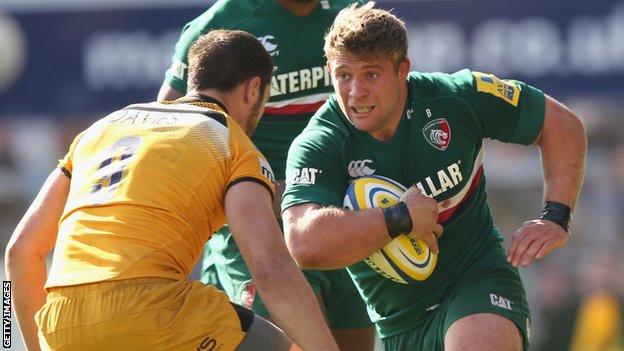 England hooker Tom Youngs will not tour New Zealand in June in order to support his wife, who needs treatment for an illness.

Youngs, 27, is the brother and club-mate of Leicester and England scrum-half Ben, and won three Lions caps on the tour of Australia in 2013.

England head coach Stuart Lancaster said: "Our thoughts are with Tom and Tiffany at this time.

"It's entirely right he stays at home to support her and daughter Maisie."

These things are more important than rugby, and Tom and his family have our full support

Youngs, a converted centre, has earned 17 caps for England since making his debut in 2012 and came off the bench to replace Dylan Hartley in all five matches during the 2014 Six Nations.

Leicester director of rugby Richard Cockerill said: "These things are more important than rugby, and Tom and his family have the full support of everyone at Leicester Tigers.

"We hope everyone respects their privacy at this time."

England boss Lancaster added that "everyone in the England squad sends them our best wishes".

Lancaster also explained that Exeter wing Nowell will not tour because the 21-year-old needs a knee operation, while the other three absentees are still returning from long-term injuries.

England will play four matches in New Zealand, including three Tests against the All Blacks on consecutive Saturdays starting on 7 June.