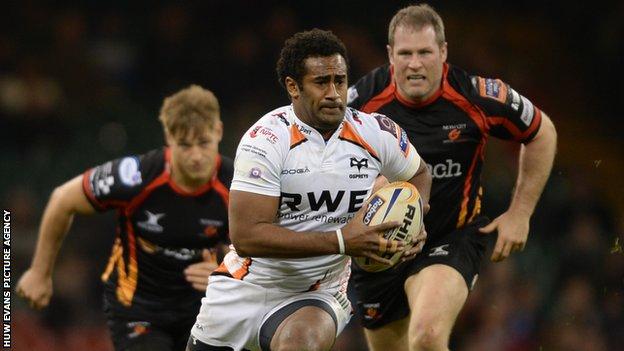 The Ospreys, Scarlets, Cardiff Blues and Newport Gwent Dragons all failed to make the Pro12 play-offs.

Williams fears the quartet could struggle to make the top four again next year.

"I'm disappointed... and I think it needs to be looked at because at the moment I can't see how it's going to change next year," said Williams.

"When it comes to Europe in all fairness, I don't think the regions have got much chance.

"You might sneak one into the quarter-finals [of the European Cup] if they are in a weaker group, but at the moment resources are totally against them. They are not going to get anywhere.

"But when it comes to the Pro12, I've got to be honest, I think it's very disappointing."

But the Welsh side missed out on a Pro12 play-off spot for the second successive season following their 30-27 defeat away at Zebre.

The Dragons are the lowest placed Welsh region, 10th in the table.

"I think when you look at a side like Glasgow who are second," said Williams, "Yes they've signed well and they've got good players.

"But to me, looking at those players man-for-man, they are not better than what the Ospreys, Scarlets, Blues and Dragons have.

"I think a lot of the regions have had a lot of bad luck with injuries but I'm disappointed not one of them have got into the play-offs."