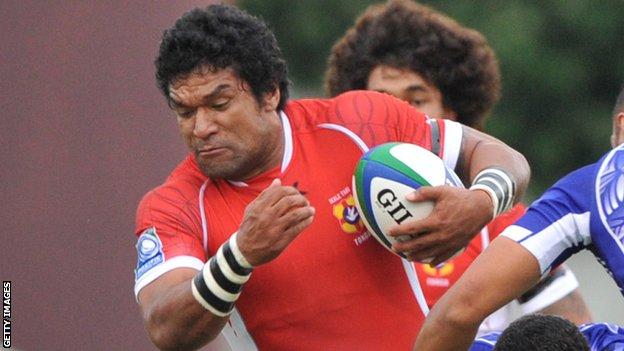 Tonga international forward Paula Kaho is one of three new signings by Jersey for the 2014-15 season.

The 29-year-old number eight has played eight times for his country.

But fly-half Niall O'Connor has been released and home-grown hooker Luke Stratford is joining Hartpury College.

Jersey have also parted company with forwards Fred Silcock and Rob Anderson, scrum -alf Jimmy Williams and winger James Copsey, the latter having been part of the island side since they were in National Two South.

Meanwhile, former Cornish Pirates centre Tom Cooper is retiring after failing to recover from injury after

"In adding Nick, Gareth and Paula to our squad, I believe we are acquiring three very talented players," said head coach Harvey Biljon.

"Combined with those players who are being retained, we have assembled a strong line-up.

"We have an exciting collection of young talent, with around two-thirds of our players being under 25.

"Mixed with some of our more experienced players, the squad should be very competitive in next season's Championship."

Kaho's last club was Havelock in Sri Lanka, while 22-year-old hooker Harris has signed his first full-time deal after completing his studies in Loughborough alongside his rugby.

Haining, 23, was part of the squad at Perth-based side Western Force, and last June.

Among the players retained by boss Harvey Biljon are Jersey-born prop Jon Brennan.

The 32-year-old has been at the club throughout its rise from amateur rugby to the professional ranks in the Championship and captained the island in their Siam Cup win over Guernsey last week.