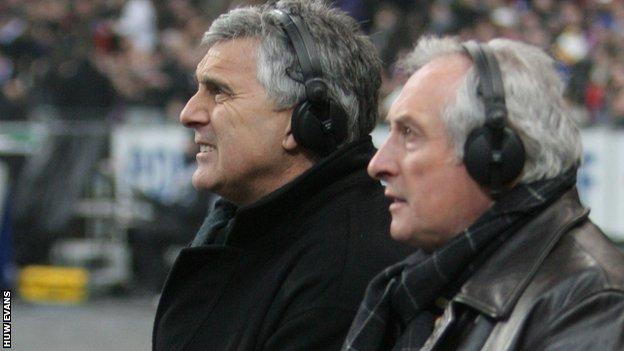 Dragons chief executive Gareth Davies is hopeful the dispute between the Welsh Rugby Union and the regions will end soon, and believes WRU chairman David Pickering has a significant role.

The WRU and Regional Rugby Wales are looking to replace their Participation Agreement which expires on 30 June.

The two parties have been in dispute over funding and player release.

"I just hope... he [Pickering] can play a significant part in the regions and the WRU coming together," said Davies.

The four Welsh regions - Cardiff Blues, NG Dragons, Ospreys and Scarlets - operate and are financed under a contract with the WRU called the participation agreement which expires on 30 June. The WRU has proposed a new deal called the rugby services agreement, but this has so far remained unsigned.

Pickering has revealed meetings between the two sides have been taking place since 6 January, and he hopes a new agreement between the WRU and the regions will be in place soon.

"We are working with our regional partners," Pickering said on Tuesday.

Davies, who has previously questioned the WRU's stance, told Radio Wales Sport on Wednesday: "The pleasing thing… is to hear David Pickering as chairman come out with those sort of supportive comments."

"I'd like to think that David sees this opportunity and this situation as being critical for the future.

"I'm delighted to have heard him come out with supportive comments."

Pickering feels a European peace deal announced in April could aid a similar outcome in Wales,

"That will help increase the amount of money coming into the Welsh game, which will make us more competitive."

He went on: "We will do whatever we can to support our regions, but we cannot bankrupt the union [WRU].

"There will be a defined amount of money we have to give to our game at regional level, semi-pro level and the community game."