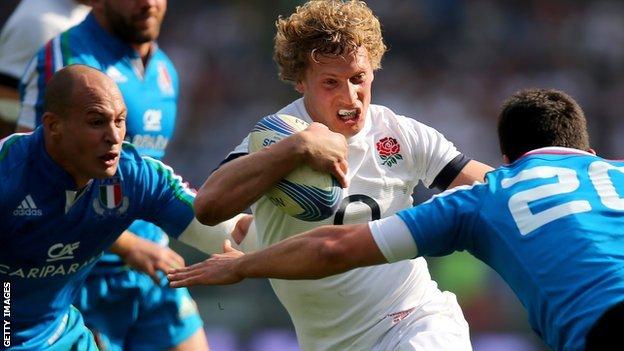 Billy Twelvetrees is a doubt for England's summer tour of New Zealand after suffering an ankle injury.

The Gloucester centre was taken off in the first half of Saturday's Premiership win over London Irish and is set to be out for up to six weeks.

England will play four matches on the tour, including three Tests against the All Blacks on consecutive Saturdays starting on 7 June.

Twelvetrees has earned 13 caps since he made his Test debut in February 2013.

"It's not ligaments, it's a relatively minor injury in the ankle, but it will stop him from playing for between four to six weeks," Cherry and Whites director of rugby Nigel Davies told BBC Gloucestershire.

"It doesn't need an intervention at this stage. One of Billy's strengths is that he's very robust and doesn't really pick up injuries.

"It's unfortunate for him as he's had a very good season. But he's had a long period of rugby, if you think about the tours with England and going with the Lions last summer."

England head coach Stuart Lancaster is already without a number of players, as Alex Corbisiero, Christian Wade, Tom Croft and Jack Nowell are all unfit for the tour.

Leicester hooker Tom Youngs will also miss out in order to support his wife, who needs treatment for an illness.