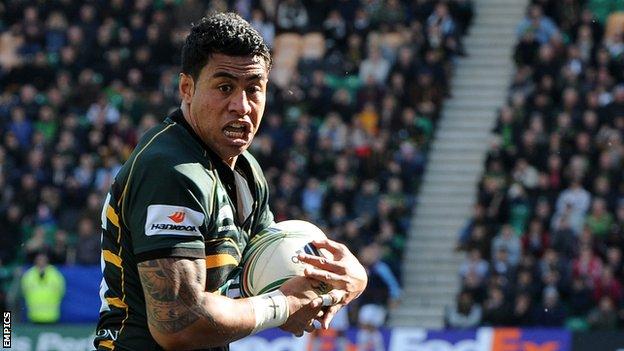 Saints could play against Tigers or Bath in the semi-finals, depending on this weekend's results.

"I'd rather play Leicester first. It's been three years since we've beaten them," Pisi told BBC Radio Northampton.

"To beat them in a semi and prevent them from having the opportunity of another final would be awesome."

He added: "We've come to the conclusion that once we get one win over them then we'll start rolling."

Tigers director of rugby Richard Cockerill has already said he would prefer to face Saints, given his side's impressive record against Jim Mallinder's men.

Leicester have not lost a Premiership match against Northampton since September 2010 and are undefeated in their last nine meetings, including last season's final victory.

A point for Saints at home against London Wasps on Saturday would guarantee a semi-final at Franklin's Gardens.

They will face the Tigers, who have guaranteed their play-off spot, in that game if Leicester beat Saracens or Bath fail to win at Harlequins.

Pisi missed most of the end-of-season run-in last year with an injury and had to settle for an appearance off the bench in the 37-17 defeat by Leicester in the final.

"I struggled with my hamstring last year, came back a bit early and wasn't really 100%," said the 27-year-old Samoan.

"Now I feel like I'm firing on all cylinders and all the boys are ready for the next four weeks of knockout rugby."