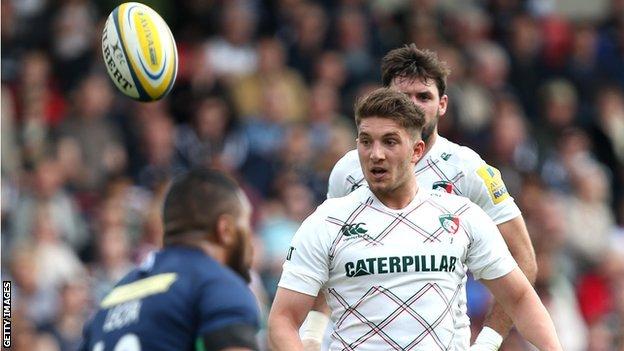 England's leading clubs will not allow their Welsh players to take part in a senior trial match that will help decide the squad to tour South Africa.

The Probables v Possibles will be the first trial match in 14 years and will take place on Friday 30 May in Swansea.

A spokesman for England's Premiership said that because the game is not a Test match they do not have to release non-England players.

The trial squads will be announced on Tuesday and Wales hope to reach a deal.

A WRU spokesman said: "Depending on selection we would liaise with Premiership Rugby, the clubs and the players to discuss availability to the Wales senior trial ahead of our summer tour."

However, a Premiership spokesman said: "Premiership Rugby has a policy to only release non-England players under the conditions of the International Rugby Board's regulation nine.

"This regulation covers international release for every Test country across the world. This trial match does not fall under IRB regulation nine."

The availability of some Wales players will also be in doubt because the Aviva Premiership final takes place a day after the trial match.

French clubs are also not obliged to make players available.

Leicester fly-half Owen Williams has been touted as a potential Wales tourist to South Africa for two Tests and a warm-up game.

But he could be at Twickenham for English club rugby's showpiece final on 31 May.

However, if Leicester fail to reach the final, the trial would have been a chance for the 22-year-old to press Test claims.

The Tigers face George North's Northampton in the Premiership semi-finals on Friday 16 May.

North is the only Wales player with a contract clause that ensures he can be available for all international training and playing duties.

It seems unlikely the WRU would invoke their right to North's services for the trial if Saints are in the final.

But the situation regarding the rest of the England-based, Welsh players is not in doubt.

Second-tier Bristol are party to Premiership Rugby's agreements, so back-five forward Ryan Jones, who switched from Ospreys for the final stages of the season would not be available for the Wales trial.

Racing Metro trio Jamie Roberts, Mike Phillips and Dan Lydiate remain on course for a French Top 14 final on 31 May.

But Clermont Auvergne full-back Lee Byrne, who last played for Wales at the 2011 World Cup may be surprised to find himself at a loose end after their shock home play-off defeat by Castres - a result ended Clermont's 77-match winning streak at home.