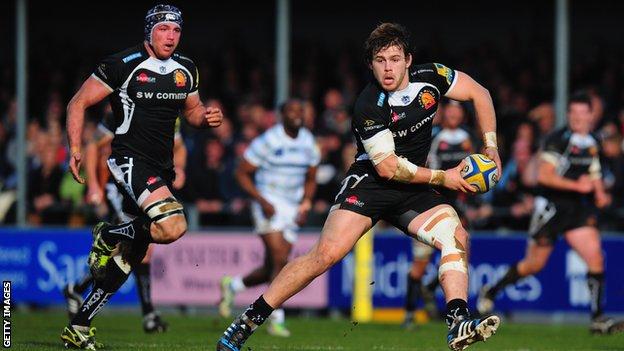 Exeter Chiefs hooker Luke Cowan-Dickie has signed a contract extension to run until the summer of 2017.

The 20-year-old made 10 Premiership appearances this season and scored a try in Saturday's win at Newcastle.

He also helped Exeter lift their first major trophy when he appeared as a replacement against Northampton in the LV= Cup final in March.

"This year has been really good for me in a lot of ways, but I know I still have lots to do," he said.

Cornishman Cowan-Dickie was a member of the England Under-20 squad that won the Junior World Championship last year and Chiefs head coach Rob Baxter believes he has the ability to make the senior national side if he continues to develop his game.

"He is making some starts, but he will be the first person to admit that he has a lot of hard work to do," said Baxter.

"For me, that's a fantastic attitude to have because we want to work hard with him and he wants to get the hard work done.

"Looking at him, I can see him over the next few years really thriving in the environment we have here at the club and playing more and more rugby," Baxter told the club website.

"He's a young man who I believe has the potential to play for England. He is a natural rugby player who loves running around the pitch and smashing into things.

"Physically he's still developing and maturing as well, but what you see is he has fantastic potential."