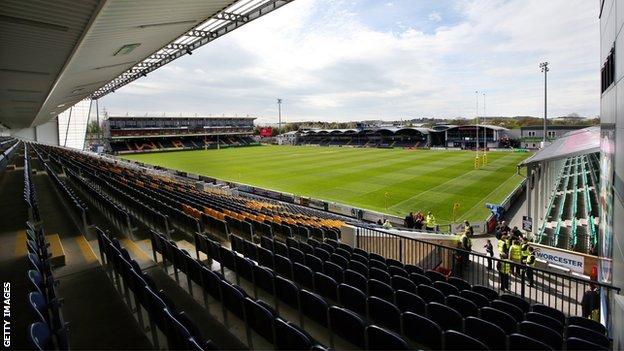 It might seem an odd moment to trumpet yourself as the stand-out club in the Midlands when you have just dropped out of the top flight of English rugby.

But it says it all about the revolution that relegated Worcester Warriors are undergoing with director of rugby Dean Ryan at the helm that they can justify such a claim.

And, by so doing, they are continuing to push the rugby boundaries.

Since millionaire owner Cecil Duckworth sold his heating empire and began fuelling the club's finances in 1996, the Warriors have taken massive strides forward, while clubs like Coventry and Moseley, the two traditional powerhouses of rugby union in the region, have struggled to adapt to the professional era.

Worcester's list of new recruits for next season's 16-man Academy squad, which will train alongside the first team, features three youngsters brought in from other clubs - tighthead prop Josh McNulty from Coventry, as well as two from Premiership clubs, Saracens hooker Jack Singleton and Leicester winger Perry Humphreys.

And now they will be hoping to tie up even younger talent at the six new centres, scheduled to open this autumn - two in Warwickshire, at Barkers Butts Rugby Club in Coventry and Warwick School; two in Herefordshire, at Luctonians Rugby Club and the Hereford Cathedral School; one in Shropshire, at the Telford College of Arts and Technology; and one in Birmingham, at a location still to be announced.

Running alongside the club's current youth development centre at their Sixways home, they will help Worcester reach out to the very edge of the catchment areas for this season's Premiership rivals, Leicester, Northampton, Gloucester and Sale.

"We have placed a huge focus on building relationships and finding the right locations to launch these centres to allow us to work with the best young players across the region," Ryan told BBC Sport.

"We will work with players to aid their all-round personal development and maximise their potential.

"The future success of this club will be determined by ensuring we develop our own young players who display the right attributes and motivations to play for the Warriors."

Since the arrival of high performance director Nick Johnston to join Ryan at Sixways in December, the club has built relationships with schools, colleges, universities and other clubs across the region and they have have now confirmed the six centres where youngsters between the ages of 13 and 18 will receive up to seven hours of rugby coaching every week.

A major focus of Ryan's attention, following his arrival a year ago, has been developing a sustainable Academy programme with a view to the achieving long-term success for the club.

His commitment to youth has been demonstrated by the fact that seven current Academy players have made their debuts this season.

And although being relegated, after just two wins in 22 Premiership matches this season, was certainly not part of the plan, the Warriors boss remains convinced the club is moving in the right direction.

"We're a year down now and it feels like we're in a tough space after being relegated," said Ryan. "But so much has been done over that time to put things in place to be able to grow this club. Further down the line, they'll look at this particular window of time and say the right things were being done.

"The club, the board and the shareholders were prepared to change. I wouldn't have come here if I didn't get those reassurances because I didn't want to go back into management just to be in survival mode.

"They looked at the future and understand what a top-six side needs in terms of staffing and facilities. And the implementation of those changes is probably the biggest positive of the year.