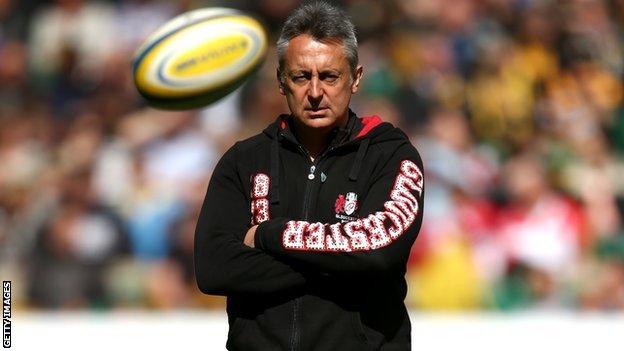 Director of rugby Nigel Davies has left Premiership side Gloucester.

The former Wales international, 49, was appointed at Kingsholm in June 2012 after four years in charge at Scarlets.

Gloucester finished fifth in Davies' first season in charge, which earned them a Heineken Cup spot.

But the Cherry and Whites have struggled this term and Saturday's defeat by relegated Worcester saw them finish ninth in the league, with eight wins from 22 games.

A statement from the club's chief executive Stephen Vaughan read: "It has been a tremendously difficult decision to reach.

"Nigel is a man who I personally have come to like and respect very much during my time at the club.

"However, playing performances and results during 2013-14 were a big disappointment to everyone at the club, As a result, the board has decided that the future interests of the team would be best served with a different individual in charge of team affairs."

Davies worked as assistant Wales coach to Gareth Jenkins before joining Scarlets in 2008, and he led the Welsh region to the last eight in the Amlin Challenge Cup on two occasions.

The former Llanelli centre replaced Bryan Redpath at Gloucester and impressed during his first season at Kingsholm, with the club finishing five points off the play-offs and securing European rugby.

They failed to make it out of the group stage in the Heineken Cup but qualified to drop into the Amlin Challenge Cup, where they lost in the quarter-finals to Wasps.

And Davies also endured a disappointing Premiership campaign, in which Gloucester lost 14 games, and he was relieved of his duties two days after the 28-27 defeat by Worcester.

Vaughan said the search for a new director of rugby will begin immediately and added: "We will leave no stone unturned in our quest to find the right man for the job.

"We believe that the role at Gloucester is one of the most prestigious in club rugby, and we're expecting interest from a high calibre of applicants worldwide."