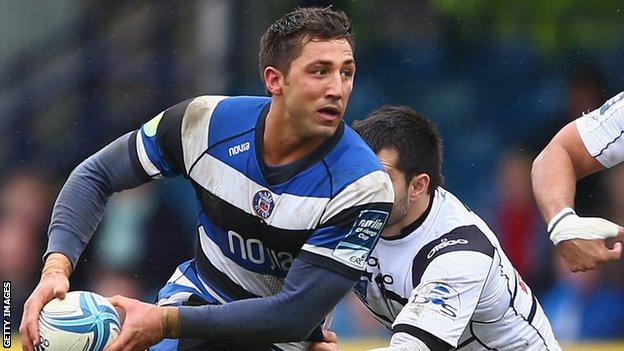 Gavin Henson has been included in the Probables squad for the Wales trial match on 30 May in Swansea.

The utility back, 32, has enjoyed something of a resurgence at Bath this season, but won the last of his 33 Wales caps in a World Cup warm-up match against England in August 2011.

Leicester fly-half Owen Williams has been named in the Possibles squad.

However, the England-based players selected may not be available for the game at the Liberty Stadium.

A spokesperson for England's Premiership clubs has said that because the game is not a Test match they do not have to release non-England players.

There has been no definite indication yet whether Welsh-qualified players at French clubs will be available for the trial match, the first to be held by Wales for 14 years.

However, BBC Wales Sport has learned Perpignan lock Luke Charteris will be available.

The trial match will help decide who is included in Warren Gatland's final squad for the two-Test tour to South Africa in June.

Cardiff Blues flanker Josh Navidi looks set to be given the chance to advance his claims at open-side in the injury absence of Sam Warburton and Justin Tipuric.

The return of Henson into the Wales reckoning marks the end of a tumultuous period since leaving the Ospreys in 2009.

The Bridgend product, who helped Wales to Grand Slams in 2005 and 2008, has played for Saracens, Toulon, Cardiff Blues and London Welsh before arriving at the Recreation Ground last season.

In that period he endured long-term injuries, dabbled with reality television and was involved in several off-field misdemeanours.

Possibles head coach Robin McBryde has selected 10 uncapped players in his 26-man squad, including some exciting rising talent at half-back.

The likes of James Hook, Ian Evans, Bradley Davies and Paul James add an experienced backbone to the Possibles.

Scarlets centre Scott Williams will definitely miss the tour as he rests his left shoulder after surgery, as will full-back Leigh Halfpenny.

Wales will play a warm-up game against Eastern Province Kings on 10 June before facing the Springboks in back-to-back Tests on 14 and 21 June.