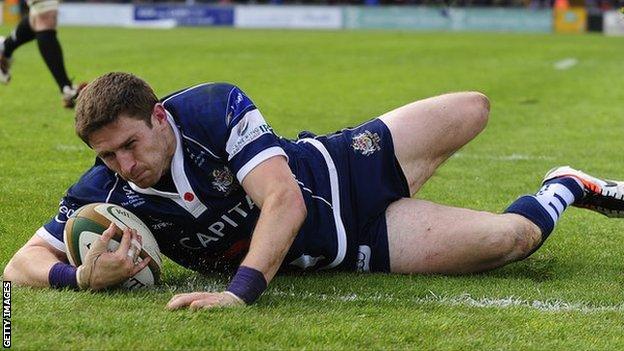 Centre Luke Eves says Bristol were satisfied to come away with a three-point lead in their play-off semi-final first leg at home to Rotherham.

Bristol finished top of the Championship table but found themselves 9-0 down at half-time on Saturday.

Eves, Mitch Eadie and Gaston Cortes touched down for Bristol in the second half but Jamie Broadley's late try made it 17-14 going into the second leg.

"A win is a win in knockout rugby," Eaves told BBC Radio Bristol.

"We're frustrated with how we handled the first half. To go in nine points down wasn't what we anticipated.

"But credit to the boys - they came through in the end."

Bristol finished 16 points ahead of fourth-place Rotherham in the standings but, in blustery conditions at the Memorial Stadium, the visitors raced into an early lead with Juan Pablo Socino kicking three penalties.

Andy Robinson's side responded well after the break and crossed three times to open up an eight-point lead.

But errors crept into play again and the Bristol defence allowed Broadley to go over in the corner in the dying minutes, which leaves next Saturday's second leg in Sheffield precariously balanced.

"We made a few unforced errors in the first half and, coupled with the high winds, we got ourselves in a bad situation," added Eves.

"But we've got quality players who guided us through and we've come away with a three-point lead. Any lead is better than none.

"We're expecting another tough game up there. But we can win the game by 50 points or one point. All that will matter is that we're in the final."