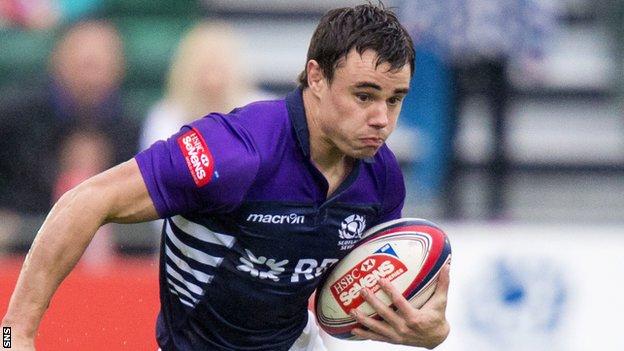 Scotland wing Lee Jones is among nine players who have been released by Edinburgh as Alan Solomons steps up his rebuilding at the Pro12 club.

Edinburgh finished a disappointing eighth in the Pro12 table in Solomons' first season in charge.

But the South African has bemoaned the lack of preparation time he had between his arrival and the start of the campaign and promised changes this summer.

The 25-year-old Jones, capped four times for Scotland since 2012, joined Edinburgh in 2010 after impressing with Scotland 7s and home-town club Selkirk.

He became a regular in the capital side's starting line-up and has made 57 appearances for Edinburgh before becoming the third Scotland international to leave this summer.

Centre Nick de Luca is joining Biarritz, while flanker Ross Rennie has signed for Bristol on a permanent contract after a spell on loan to the English Championship club.

The 31-year-old Atiga, who has been capped once by the All Blacks, arrived from Super 15 side Highlanders in 2012 and has made 29 appearances.

Basilaia, a regular starter for his country, arrived in the same summer as Atiga from Valence d'Agen, but a knee injury and international duty restricted the 28-year-old to 18 Edinburgh appearances.

"He plans to return to France and continue his rugby career alongside a number of his countrymen," said an Edinburgh statement.

A shoulder injury restricted Parker to 15 appearances since his arrival from Esher in 2012 and, after returning to action with Melrose in January, the Wales-qualified forward spent the latter half of the season on loan to Ospreys.

Hooker Walker, a 23-year-old formerly of Currie, joined Edinburgh in 2010 and made 16 appearances but joined English Championship side Nottingham on a season-long loan in search of regular game time.

Englishman Leck, who arrived from Sale Sharks in 2011, found himself behind Scotland internationals Mike Blair and Greig Laidlaw at scrum-half, but he made 34 appearances before the 27-year-old's current campaign was ended prematurely by a shoulder injury.

Scotland A tight-head prop Lewis Niven, previously of Edinburgh Accies, joined the professional ranks in 2010 after winning the John Macphail Scholarship, but the 26-year-old has been forced to retire from rugby because of "an unfortunate sequence of injuries" over the past 18 months.

Black, a former Scotland youth international, joined Edinburgh from Leeds Carnegie in 2011, but the 24-year-old only made one start in his five appearances for the Pro12 club.

Edinburgh had already announced that fly-half trio Harry Leonard, who is joining Leeds, Gregor Hunter and Piers Francis will be leaving Murrayfield.