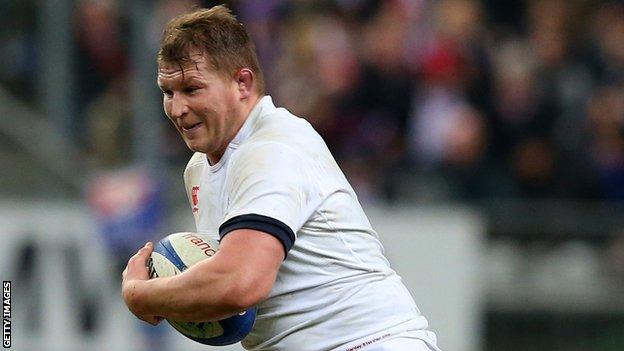 Northampton captain Dylan Hartley will miss Friday's Premiership semi-final against Leicester, but expects to be fit for England's summer tour.

The 28-year-old has not played since injuring a shoulder in March.

But the hooker is hopeful of returning before the end of the season and in time for England's three-Test series in New Zealand in June.

"We're just taking it day by day. The bigger picture is I could go out this week and dislocate my shoulder and that wouldn't be too good."

England head coach Stuart Lancaster has already lost hooker Tom Youngs for the matches against the All Blacks, with the Leicester forward staying home to support his wife, who needs treatment for an illness.

The sides play in Auckland on 7 June, Dunedin on 14 June, and Hamilton on 21 June.

Saints hope to have him back for next week's Amlin Challenge Cup final against Bath and a potential Premiership final, should they get past their East Midlands rivals at Franklin's Gardens on Friday night.

"Not to be a part of the semi is crushing in a way," Hartley admitted. "But the reason we've done so well is because we've got such a good squad.

"There's still big games to come and then I've got a tour to think about as well.

"The consensus is I should get my shoulder right, bearing in mind the club still has big games and I've got internationals."

Saints director of rugby Jim Mallinder added: "He's improving by the day. But Friday is a little bit too soon.

"We could have chucked him in but don't feel it's worth it. The hookers are playing really well."