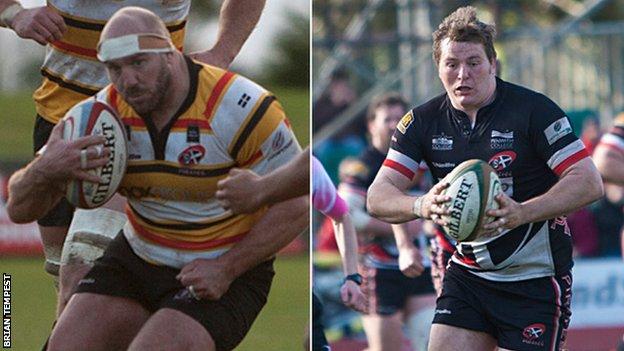 Cornish Pirates duo Alan Paver and Rob Elloway are to help coach the forwards at National Two South side Redruth.

Veteran prop Paver, 35, has while Germany international hooker Elloway joined the Pirates in 2007.

They will assist Steve Larkins, who was

"Because I've got the player-coach role at the Pirates I'm just trying to gain as much coaching experience as I can," Paver told BBC Sport.

The duo will still train full-time at the Pirates during the day, and assist with Redruth's evening training sessions as well as attending matches when their Pirates schedule allows.

"It's going to be more of a tool for Redruth to get coaching for their forwards and for me to gain that experience," Paver explained.

"I won't be able to make matchdays as much as I'd like but I think I can still be a positive influence."

Paver has spent 12 years at the Mennaye having previously played for Plymouth Albion and Bedford, and helped coach Cornwall, while Elloway has assisted with local sides Hayle and St Ives.

"The position I'm in to coach and play in the Championship and be able to assist and coach at Redruth, in terms of my own experience and development, is fantastic," Paver added.

"I don't think you can ask for a better start in coaching."