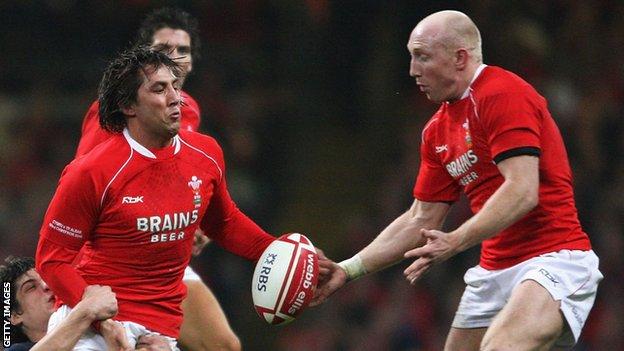 Tom Shanklin says Gavin Henson's inclusion in the Wales trial on 30 May is reward for hard work.

The utility back, 32, played his last game for Wales against England in August 2011, but has enjoyed a resurgence at Bath.

And Shanklin says his former Wales midfield partner could offer "something different" in midfield.

"He's certainly playing well for Bath and has made a pretty good impact in there," he said.

Wales coach Warren Gatland will name his 31-man squad for the two Test tour of South Africa immediately after the trial match at Swansea's Liberty Stadium.

Shanklin and Henson were the centres when Wales claimed the Six Nations Grand Slams in 2005 and 2008.

The former Cardiff Blues player - who was forced to retire by injury in 2011 - does not expect Henson to make the tour but is glad to see him back in the limelight after his good form at Bath.

"Bath have signed him for another year, they're happy with the way he's going," said Shanklin.

"And I've spoken to a few guys I know down in Bath and they say he's training hard, he's working hard he really wants to make a go of this and he's played very well towards the end of the season.

"He's something who offers something a bit different in the midfield.

"I played with him plenty of times. I know his strengths and his weaknesses and the more game time he gets the more comfortable and better he seems to be playing."

However, Henson's chances of playing for Wales may evaporate before he has a chance to pull on the red short of the Probables in the trial.

England-based players selected may not be available for the game at the Liberty Stadium.

A spokesperson for England's Premiership clubs has said that because the game is not a Test match they do not have to release non-England players.

Coach Gatland warned: "Gavin is fourth or fifth in line with injuries. But it's a great opportunity, but if he isn't released it's pretty unlikely he'll be selected for the tour."