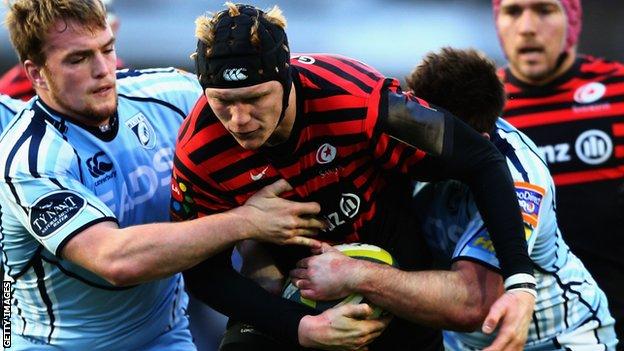 Jubb, 21, played under Shanahan in a loan spell at Old Albanians and was dual-registered at Bedford this season.

After I heard he had been released by Saracens I spoke to him and he was very keen to come to Plymouth Albion.

South African-born Zeiss, 23, was educated in the UK and played for Esher before moving to France last summer.

Albion have also agreed a new deal for prop Tom Harrison - the eighth forward to sign for the club in the last month.

and have already committed themselves to the Brickfields for the 2014-15 Championship campaign.

Jubb is a former England Under 20s player who made two LV= Cup and one Premiership appearance for Saracens this season.

"Tom is a very good rugby player who, as well as the second row, can also play six and eight," Shanahan said.

"After I heard he had been released by Saracens I spoke to him and he was very keen to come to Plymouth Albion.

"Cameron is a big strong prop who will strengthen our front row.

"He can play on both sides of the front row providing us with more options.

"I did a fair bit of research about him and am pleased he has decided to move to Albion."