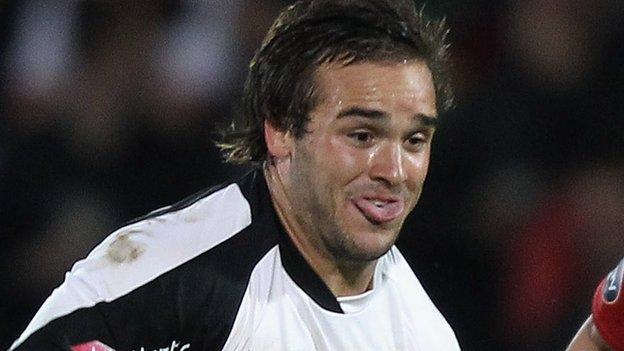 Relegated Worcester Warriors have made two more signings as they aim to make a rapid return to the Premiership next season.

Dean Ryan has taken his tally of new players to 17 by bringing in giant Munster lock Darren O'Shea and young scrum-half Jean-Baptiste Bruzulier, from French side Le Pays d'Aix.

O'Shea, 21, who stands at 6ft 9ins, came through the Munster youth system.

Bruzulier, also 21, has represented Wales at age-group and Sevens level.

He was with Saracens before moving to the French ProD2 in 2012 and has also spent this season training with French club Toulon.

"I'm looking forward to getting stuck in," said Bruzulier. "I really believe that the project for the next couple of years is very exciting. I want to work hard and earn my place."

O'Shea, who was part of Ireland's Under-19 and Under-20 development squad, started with Crosshaven RFC before making the move to senior club side Dolphin RFC.

"I am very keen to develop further and believe that playing regularly with Worcester is the right platform to bring on my game over the next few years," he said.

"Warriors are a club who have placed a big emphasis on developing young players to build a successful team."

Ryan said: "Darren and Jean-Baptiste are examples of talented young players who are looking for surroundings which will enable them to maximise their potential.

"They will have opportunities to progress in a competitive environment amongst a group of committed players."

Murray, 33, arrived at Sixways in October 2012 from Newcastle Falcons and made 28 appearances in all competitions after not making himself available on Sundays because of his religious beliefs.

Warriors have also announced their pre-season programme as they prepare for life back in the Championship.

They will begin at home to Ospreys on Friday 15 August before travelling to meet Sale, to whom they lost five times in three different competitions this season, on Saturday 23 August.

Worcester will then meet Premiership opposition again when they host Exeter at Sixways on Friday 29 August.